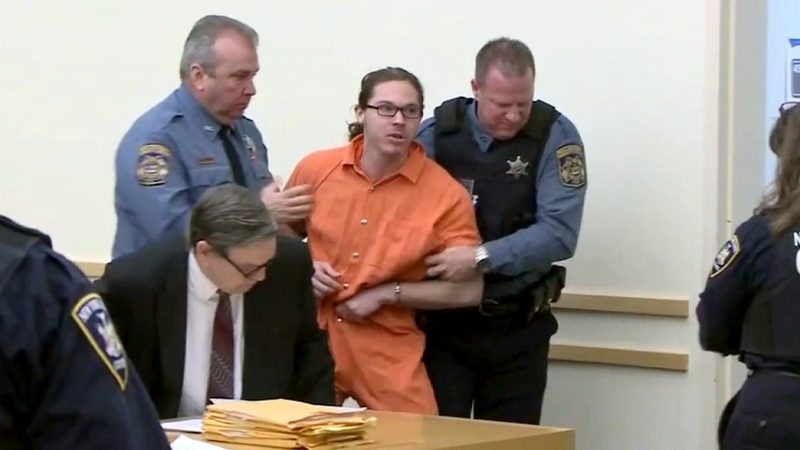 NEW CITY, New York (WABC) -- A man was sentenced to 20 years to life in Rockland County for murdering a retired teacher after answering a Craigslist ad for a roommate.

Twenty-year-old Dylan Lentini's sentencing was delayed Tuesday after he made several outbursts during the proceeding, interrupting the judge and the prosecutors, and the court was cleared.

Watch as Dylan Lentini has an outburst during court and is taken away.

After a delay, Lentini was brought back and given his sentence.

Lentini claimed he stabbed Wimbert while fighting off a sexual assault who was defending himself. A jury convicted him of second-degree murder.

Police said Wimbert had posted an ad for a roommate on Craigslist. The suspect answered the ad and made arrangements with Wimbert to be picked up from the train station in White Plains on Nov. 27.

Prior to the ad being answered, there was no relationship between the two men, police said.

Following the outbursts, a calmer Lentini addressed the crowd before sentencing. In a rambling and often disjointed statement, he maintained his innocence.

"The overwhelming evidence in this case established that the defendant did not act in self-defense when he stabbed his victim over 30 times, several times in the back," said Prosecutor Thomas Zugibe. "Instead they found him to be a cold-blooded killer."
Related topics:
west nyackmurdercraigslistrockland countystabbing
Copyright © 2022 WABC-TV. All Rights Reserved.
TOP STORIES
14-year-old ID'd as person of interest in death of Kyahara Tay
Kidnapped CA teen found in NY thanks to quick-thinking detective
1 killed, several injured in multi-vehicle crash in New Jersey
Dave Chappelle attacker now charged in December attempted murder case
AccuWeather: Warm west
LIVE | The Countdown
NYC Health Department investigating possible monkeypox case in NYC
Show More
529 Plans - How they can help you save/pay for college
NJ swim school teaching children how to survive a water emergency
Rihanna and A$AP Rocky welcome their first child
2nd racist incident at sports event between Nyack, Pearl River
EMT released from hospital after being shot in ambulance by patient
More TOP STORIES News