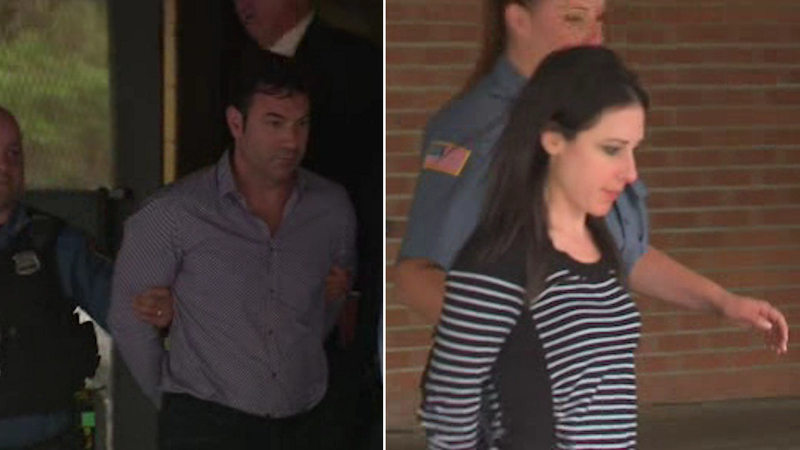 RAMAPO, New York (WABC) -- A well-known podiatrist in Rockland County has been arrested for allegedly plotting to have his wife killed. Police describe this as a complicated and convoluted case.

Ira Bernstein, 41, said nothing as he was escorted in handcuffs to a waiting police car.

The well-known podiatrist is now being charged in what Ramapo police describe as an elaborate conspiracy.

The other defendant is 36-year-old Kelly Grideluk, who police describe as Bernstein's girlfriend. She too is being charged in the alleged conspiracy.

Police say it began when an informant with information came to police in neighboring Spring Valley back in April.

"A Spring Valley police officer was sharp enough to get enough information to develop this case to the point where he was able to come over to the Town of Ramapo, then we took it from there," Weidel said.

The investigators along with the district attorney's office describe an elaborate plan using wiretaps, meetings, and even cash payments to build a complicated case against the pair.

"There were repeated meetings. They turned over things that would have a helped a would-be killer to go forward. There was money exchanged," said Det. Lt. Mark Emma, Ramapo Police Department.

Police also charge the pair of conspiring to beat up two insurance investigators who they say were looking into Ira Bernstein's podiatry business.

"This is all about a conspiracy to commit murder. It was basically a despicable plan to take the life of a wife and a mother and it appears to be for financial gain," said Thomas Zugibe, Rockland County District Attorney.

Police say, Susan Bernstein lives in a home in Suffern behind a locked gate, and does not live with her husband.