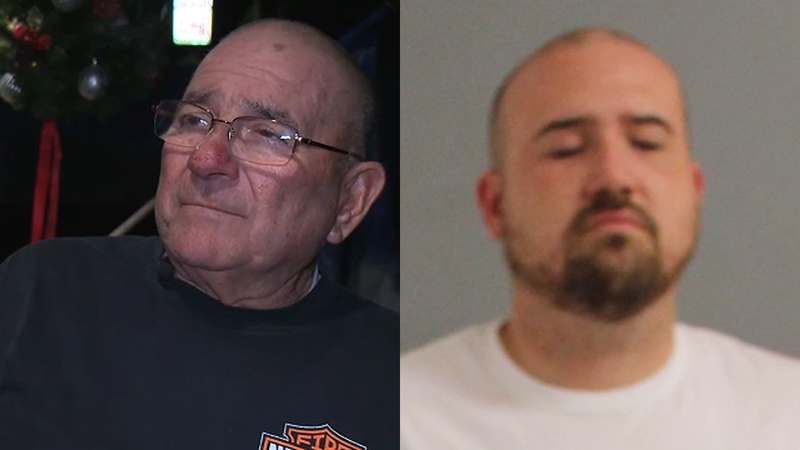 NORTH GROSVENOR DALE, Connecticut (WABC) -- One man is in custody after a vicious attack on a crossing guard at an elementary school in Connecticut.

Seventy-one-year-old Rocky Navarro has been a crossing guard at the Mary R. Fisher Elementary School in North Grosvenor Dale for more than 20 years and a firefighter for 55, but all that experience could not prepare him for what happened Monday.

As the kids were heading to school, he says a car swerved out of line toward the crosswalk where the children were walking. He stepped in to stop it.

"The fender hit my leg, and I jump...and ended up on the hood of the car," he said. "He jumped out of the car, grabs me. He is 6-foot something and 285 pounds, and then pops me. It was just like hitting a stone wall."

Several mothers stepped in to break it up, while others went for help to get security.

Police say 31-year-old Jason Beshaw, whose child attends the school, has been arrested.

Navarro is a pillar in the community and loved by all, and no one can understand why this happened.

"I have been on the school board for 18 years and I have heard all kinds of stories," Board of Education Chairman Bill Witkowski said. "But never anything like this, never."

Not only did it happen in front of all the kids, but also cameras. The school has several cameras mounted on the sides of the lamp posts and at the nearby early childhood center.

"It happened in front of a lot of kids and a lot of parents," Witkowski said. "So that is something we have to deal with."

Beshaw is facing several charges including assault and reckless endangerment.

"It came so fast, even the trooper said, 'I watch that on camera, it was like one, two, three, bang,'" Navarro said. "'You got clipped, you got hit. Pow, pow, you were on the ground."

The school has banned Beshaw from the property, and he can no longer drop off or pick up his child. And while parents are calling Navarro a hero, he says he's just glad no children were hurt or even killed by the driver.

Despite his injuries, Navarro says it's not going to stop him from getting back out there and continuing to watch over those kids as a crossing guard.