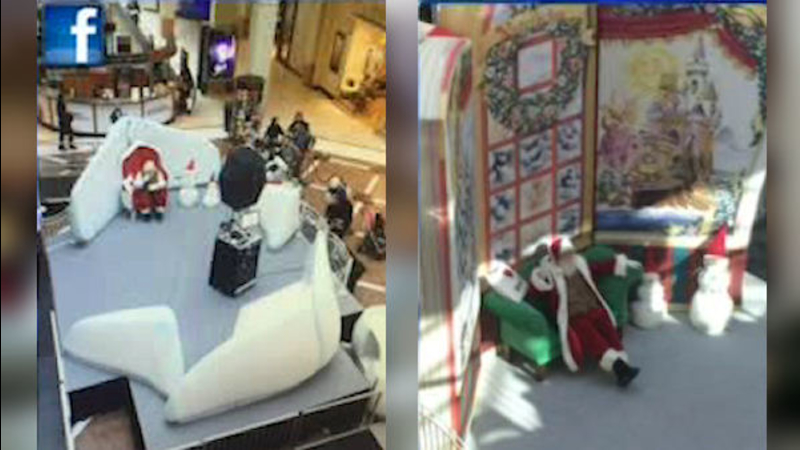 NEW YORK (WABC) -- From Starbucks coffee cups to mall displays, there is a growing backlash on social media to companies that try to take the Christmas out of Christmas.

There was a public outcry when the mall holiday displays, including the one at the Roosevelt Field Mall on Long Island, had no Christmas tree.

After the complaints, changes have been made.

"I have never seen anything like this before, the whole 'glacier-gate' bring the Christmas tree back!" one person commented.

People's frustration on Twitter and Facebook seems to have started with Roosevelt Field Mall and its futuristic display. Some are even calling for a boycott.

"I am an agnostic and I don't like the cold blandness of the decorations," one person commented.

So a change happened, and on Facebook a picture appeared of trees.

But the firestorm on social media continued: "Keep Christ in Christmas" and "The power of the people through the media worked! Merry Christmas!"

Then came another posting showing that the ice glacier came down and was replaced by Santa and some Christmas trees.

"I think this was a first time thing and a pilot project by Simon Malls and they tried this experiment in five different malls and it backfired in all five!" said Melody Hahm, of Yahoo Finance.

Roosevelt Field is owned Simon Malls which also owns the Westchester Mall. A picture was posted over the weekend of the Christmas display of Santa and two snowmen. Walking in on Monday Eyewitness News found a new Nutcracker backdrop and the same snowmen.

The Simon Malls President, David Cortis, sent Eyewitness News a statement:
"After listening to customer feedback we immediately decided to reinstall our existing Christmas decor and hope our customers will join us in celebrating the Christmas season."

The thing is, no matter how you feel about any of this, from a business perspective this is the busiest, most crucial, time of the year for malls.

The International Council of Shopping Centers found, "50% of parents with kids under age 13 go to the mall solely to see Santa Claus," Hahm said.

Then also over the weekend, on social media, Starbucks came under fire for offering simple red and green disposable cups.

Another mall all the way down in Charlotte, NC had the same outcry and caused the same Christmas decoration changes.