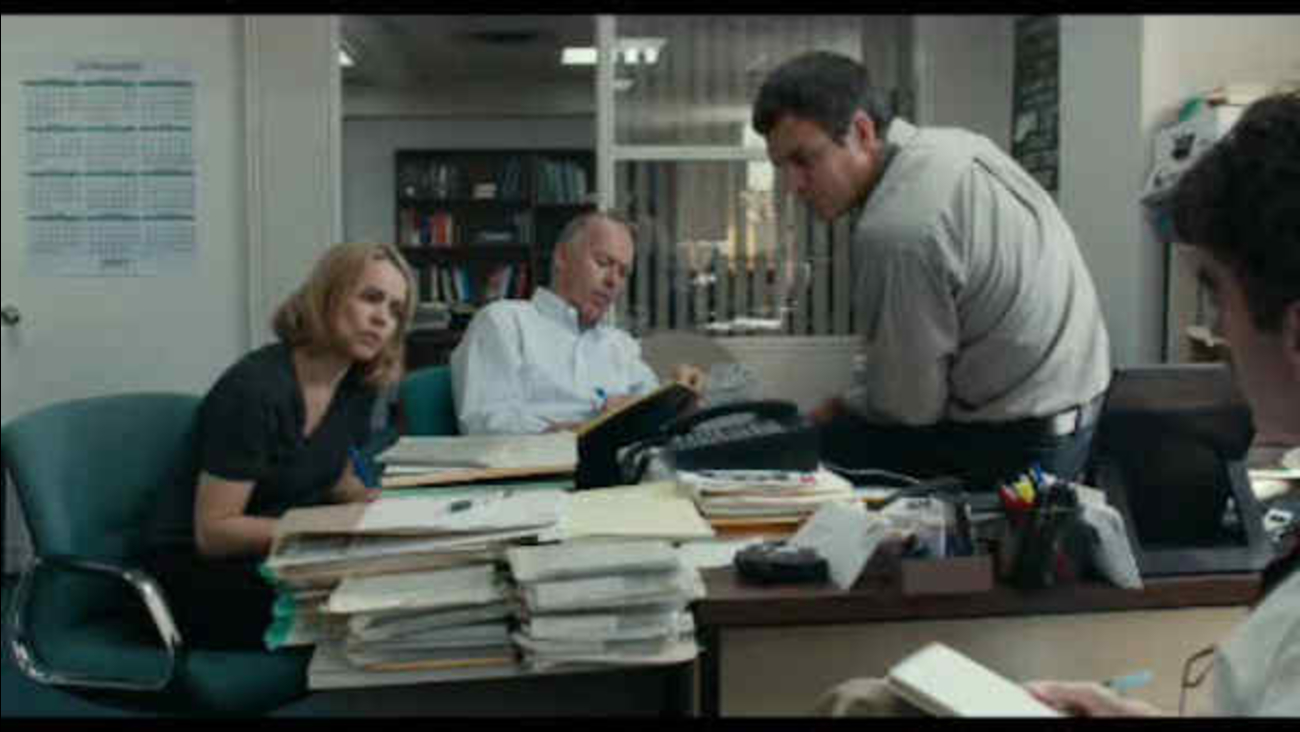 NEW YORK (WABC) -- As 2015 draws to a close, it's time to look back on the year in film, at the movies that made us laugh, cry, tremble and edge to the ends of our seats in excitement.

Here are Sandy Kenyon's top 10 films of the year (click the movie for his review).

There are just handful of stars compelling enough to go solo for most of a movie and still hold our full attention, and Matt Damon is one of them. But what also made The Martian so great is watching it in 3-D on a big screen.

A mother and her son are held captive in a single room, and while the premise is terrifying, the acting is just shy of miraculous. It is every bit as engaging as a couple of movies set in New York City during the 1950s. Brooklyn tells the story of a young woman from Ireland, while Carol concerns a lesbian love affair in a less-enlightened time.

The Big Short helps viewers understand how the greed of Wall Street bankers brought the country and the world to the brink of disaster back in 2008, how a smart few made a fortune defying what passed for wisdom.

5. Beasts of No Nation

Beasts of No Nation brought light to a dark world like no other movie this year.

The Danish Girl gave us a female soul within a male body and moves audiences to tears.

While Inside Out leaves viewers happy to be a human being, Sicario was as brilliant as Emily Blunt's performance as she sees how the war on drugs can never be won.

The top movie of the year is Spotlight, which lives up to its name and shows how sexual abuse by Catholic priests finally got exposed. It is also the best movie about journalism since All the President's Men was released almost 30 years ago.

A trio of engaging movies just missed the list. Audiences will never look at football the same way after Concussion exposes the true dangers of the game, and Steve Jobs was a very compelling portrait of a flawed genius.

Finally, a lot of people thought Star Wars: The Force Awakens was the top movie of the year or at least among the top 10. I like the way the movie integrated all that has come before in this saga, and I like how new characters were introduced and mixed with those we know and love. I also admired how director J. J. Abrams ensured the legacy will continue, and yet, it fell short of "magical" for me. There were magical moments, such as when Han Solo and Princess Leia shared the screen, and even magical minutes of battles. But the movie felt too long and still fell short in that it was a whole that was less than the sum of its parts.
Related topics:
arts & entertainmententertainmentmoviemovie reviewsandy kenyon
Copyright © 2022 WABC-TV. All Rights Reserved.
TOP STORIES
Cop and teen wounded when teen's gun goes off in Bronx: NYPD
Dramatic rescue of woman in deadly Bronx house explosion
Fashion icon André Leon Talley dies at 73
NY AG acts to enforce Trump family subpoenas
In 'extremely dangerous' moment, top US diplomat travels to Ukraine
COVID Updates: 75% of NYC employers say omicron delayed return to work
'Name a Roach' for your Valentine at the Bronx Zoo
Show More
Some issues arise on 1st day of USPS free COVID tests
AccuWeather: Milder but brisk
Mom, child dead after vehicle found floating in pond in New Jersey
Airlines worldwide rush to change flights over US 5G problems
Giuliani among Trump allies subpoenaed by Jan. 6 panel
More TOP STORIES News