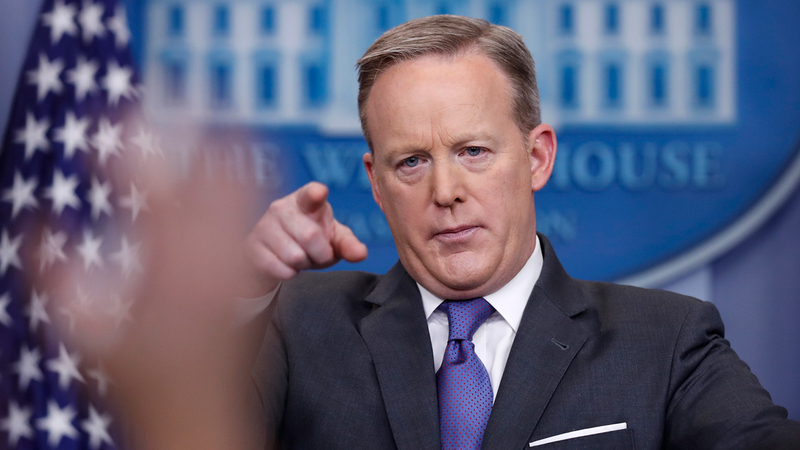 From the beginning, Sean Spicer's tenure as White House press secretary has been a turbulent ride.

It's been an honor & a privilege to serve @POTUS @realDonaldTrump & this amazing country. I will continue my service through August

Here's a look back at some of Spicer's most memorable moments as White House press secretary:

At his first press conference, one day after the inauguration, Spicer battled the press about stories that Trump's inauguration crowd size had been misrepresented.

"This was the largest audience to ever witness an inauguration - period - both in person and around the globe," he said. "These attempts to lessen the enthusiasm of the inauguration are shameful and wrong."

This statement has since been proven to be inaccurate, something that Spicer acknowledged later.

One of the most talked about moments wasn't at a briefing, but rather actress Melissa McCarthy's portrayals of Spicer on SNL.

McCarthy portrayed an angry, sometimes violent Spicer who often worries that Trump has been lying to him. Sketches have involved Russian nesting dolls, a motorized podium cruising near the CNN New York office and a dramatic kiss.

Less than a month into the position, many speculated Trump wasn't happy with Spicer's role. At the March 10 press briefing he wore his U.S. flag pin upside down until a reporter corrected him.

According to the U.S. code, an upside-down flag is a "signal of dire distress in instances of extreme danger to life or property."

This led many to believe he was under immense pressure.

In response to a question from reporter April Ryan, Spicer deployed a memorable critique of the media's coverage of Trump's ties to Russia.

During the back-and-forth questioning, he told her to stop shaking her head, which prompted backlash.

Spicer incorrectly claimed that Adolf Hitler did not use chemical weapons during World War II while comparing him to Syrian President Bashar al-Assad despite the Nazi leader's well-documented use of gas chambers to kill his victims during the Holocaust.

"Someone as despicable as Hitler... didn't even sink to using chemical weapons," he said. Spicer attempted to clarify, but fumbled in trying to describe gas chambers and said he was aware of "Holocaust centers."

Spicer later put out a statement to apologize for the remarks.