Christmas Day fire burns down home of family in Secaucus 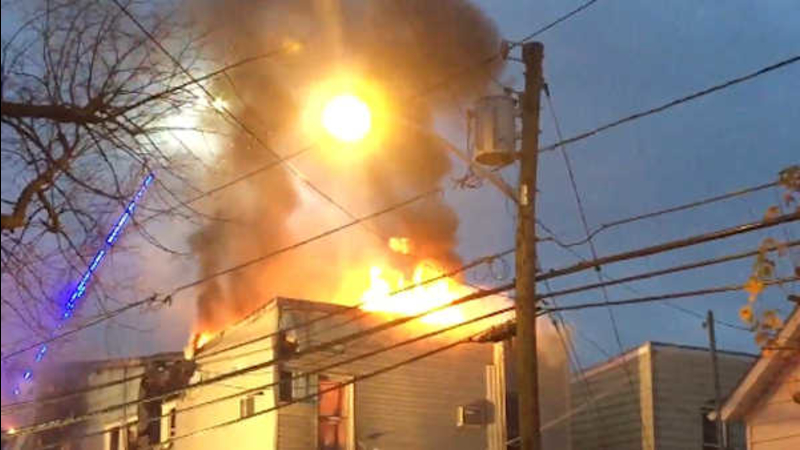 SECAUCUS, N.J. (WABC) -- A Christmas Day fire tore through a house in Secaucus, destroying a home lived in by three generations of one family for over six decades.

The three-alarm fire began just after 3:30 p.m. in the two-story home on Myrtle Avenue.

For hours, firefighters battled the stubborn blaze, as flames incinerated the old rowhouse.

"Every time they put something out something else flamed up," said homeowner Joe Lazicki.

And Lazicki stood dumbfounded, watching the only home he ever knew burn practically to the ground.

He'd been home just an hour when he first smelled the smoke, just back from the hospital for a heart procedure.

"This is a test to see how good they did. See how good it holds up to this," said Lazicki.

This would test anyone, not least his 67-year-old mother Irene. The family has lived here for 62 years.

"I just don't know how to express it. You know? When I saw the flames I cried. I was afraid. I never expected it to burn. It was horrible," said Irene Lazicki.

It started early Christttmas afternoon, when an old electric stove in the basement burst into flames. Volunteer firefighter Mike Gonelli was one of the first in.

"Right away the fire got above us and really just pretty much took out the entire house," he said.

And it shocked the tight-knit neighborhood, where everybody knows everybody. And Gonelli is also the mayor.

After the flames were out firefighters did manage to salvage some family photos and other heirlooms. But the house will have to be demolished. Six decades of living, up in flames.

"What could you do? Nobody died, you know? It's all stuff that can be replaced I guess but it's a nightmare," said Joe Lazicki.

#BREAKING: fire fighters were "surrounding and drowning," but now no water on flames, which are worse. #abc7ny pic.twitter.com/1HguhBJVIr