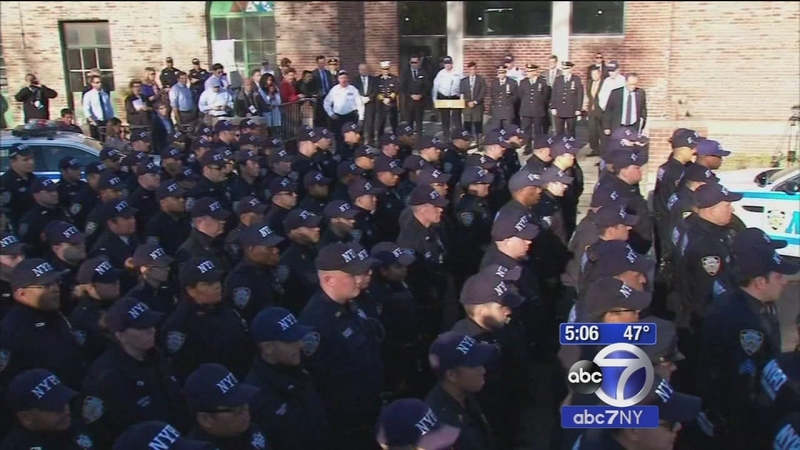 NEW YORK (WABC) -- Security around the city was bolstered considerably with the recent rollout of the new Critical Response Command, a counter-terrorism unit of 560 officers on constant patrol, and to any terrorist, NYPD Commissioner William Bratton had a simple message Tuesday.

Security in places like Times Square and other large gathering areas is certainly a big concern especially with the upcoming holidays. Some security measures you won't notice. Others are already quite visible.

Heavily armed and now on higher alert since the Paris attacks, the NYPD's Strategic Response Group patrolled through Times Square. Their show of force is as much of a deterrent along with new security measures. The upcoming holidays are prompting the layering of more security.

"We're constantly trying to stay ahead of the curve," said Bratton.

And now with the rollout of the first of more than 500 officers in the new Critical Response Command, this counter terrorism unit adds a layer of security not seen before. All volunteers are highly trained and heavily armed.

"We have the capacity in New York to deal with almost two dozen multiple events occurring in the city with all the resources we have available," said Bratton.

But as the commissioner has revealed in recent days, sometimes the devil is in the details. He is being briefed on a great concern that terrorists are using devises like PlayStation and XBox, encrypted ways of communicating that are not easily monitored.

"Playstation devices are something that so many people use to play games but evidently have many of the same capabilities as the smart phones," he said.

Yet another concern are the suicide bomb vests worn by the terrorists in Paris and what that means for officers here.

"We want to give them intelligence about what they might be up against as they are moving into those locations," said Bratton.

The NYPD along with the FBI has sent officers to Paris to learn as much as they can about the way the terrorists worked and whether there are additional concerns for New York City.

"We are much smarter and stronger together than we are divided and that is exactly what the Joint Terrorism Task Force is all about," said New York FBI Director Diego Rodriguez.

Terrorism and security were the focus of Bratton's comments made at the Harvard Club Tuesday morning outlining NYPD new technology and resources development, including smart phones, additional officers and additional counter-terrorism capabilities -- even as ISIS is exploding on the international stage.

When asked Monday about the possibility that the Paris plot was hatched over game chats, he said neither he or the head of the FBI office in New York had heard that.

"This is not the kind of thing that is a wake-up call to New York City," NYPD deputy commissioner for intelligence and counter terrorism John Miller said. "We've been awake about this for a long time."