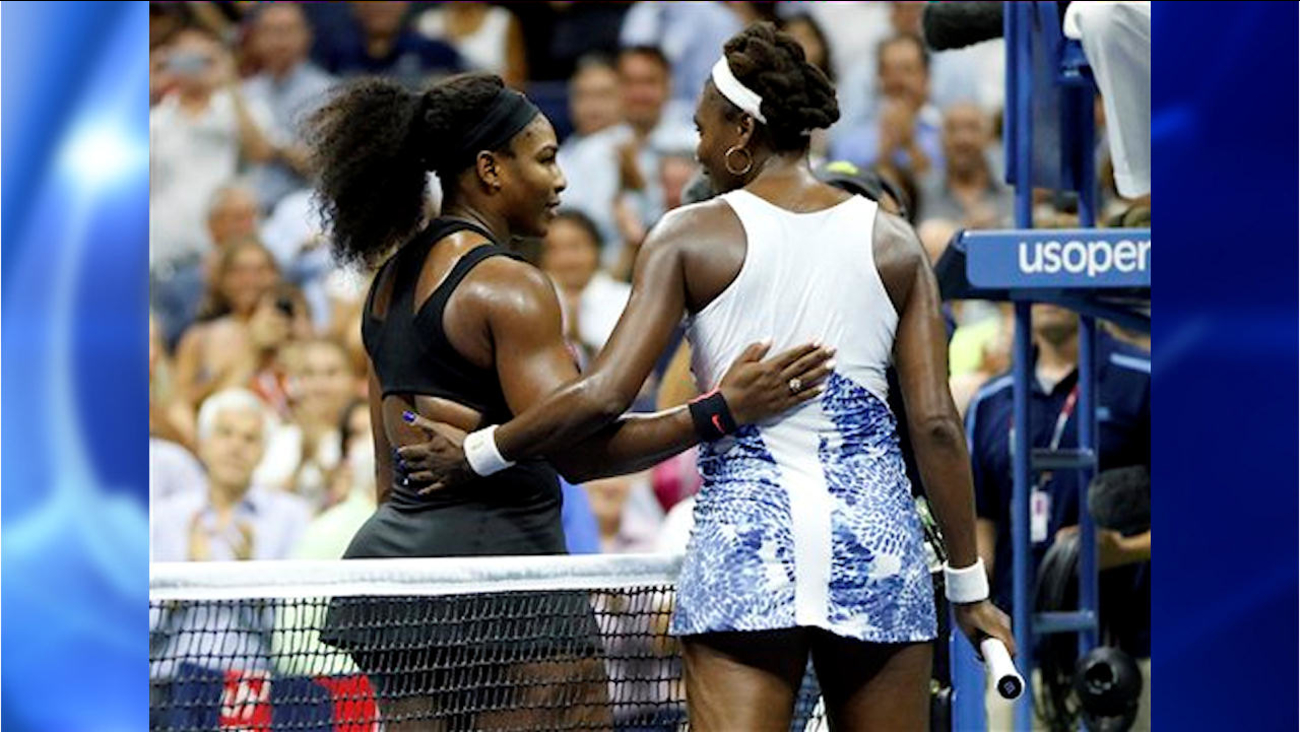 NEW YORK -- For stretches of the 27th edition of Williams vs. Williams, Venus gave Serena all she could handle.

And when Serena took control down the stretch to emerge with a 6-2, 1-6, 6-3 victory in a well-played U.S. Open quarterfinal, allowing her to continue pursuing the first calendar-year Grand Slam in more than a quarter-century, a smiling Venus wrapped both arms around her little sister for a warm hug at the net and whispered, "So happy for you."

"Obviously we are very, very tough competitors on the court," Serena said later, "but once the match is over, the second it's done, you know, we're sisters, we're roommates, and we're all that."

Serena called their unique sibling rivalry "the greatest story in tennis," and who would argue? A couple of kids taught by their dad on cement courts in Compton, California, making it all the way to the top.

With two more match wins, the No. 1-ranked Serena would become the first player since Steffi Graf in 1988 to collect all four Grand Slam titles in a single season. Plus, if she can win what would be her fourth U.S. Open in a row, and seventh overall, she would equal Graf with 22 major championships, the most in the professional era and second-most ever behind Margaret Court's 24.

"That would be huge, not just for me, but for my family, just for what it represents and how hard we have worked and where we come from. So it would be a moment for our family," said the 23rd-seeded Venus, who is 15 months older. "But at the same time, if it doesn't happen it's not going to make or break you. We don't have anything to prove. She has nothing to prove. She's really the best ever."

Serena is 16-11 in their all-in-the-family matches, including 9-5 in majors and 3-2 at the U.S. Open. And 14 years to the day after Venus beat Serena in the 2001 final at Flushing Meadows, they met again with so much at stake.

Well-known folks such as Donald Trump - who was booed when shown on video screens - Oprah Winfrey and Kim Kardashian dotted the teeming stands in Arthur Ashe Stadium, and the sellout crowd of 23,771 got its money's worth.

"They both played their best," said Serena's coach, Patrick Mouratoglou. "If they were feeling uncomfortable with playing each other, they could not play at that level."

Both pounded serves fast, very fast, each topping 120 mph. Both returned well, oh so well, each managing to put into play at least one serve at more than 115 mph by the other.

When a reporter implied he wasn't sure whether Venus really wanted to beat Serena, the reply was drenched with incredulity.

The 43rd-ranked Vinci is playing in the 44th major tournament of her singles career, the second-most appearances by a woman before reaching her initial semifinal. Vinci is 0-4 against Serena and joked about wearing a helmet for protection from some of the 33-year-old American's booming shots.

"She's the favorite. Maybe she'll feel the pressure. Who knows? It all depends on her. If she serves well, it's tough to return," Vinci said. "But I have nothing to lose."

Against Venus, Serena earned a key break to lead 2-0 in the third set thanks to a down-the-line backhand winner that landed in a corner, then she gritted her teeth, held clenched fists near her head and leaned forward, holding the pose. When she got to match point as a shot by Venus sailed long, Serena dropped to a knee behind the baseline and pumped an arm, her back to her sister.

At 35, the oldest woman to enter the tournament, Venus had her own reasons for wanting to beat Serena, of course. She hasn't reached the semifinals at any Grand Slam tournament since the 2010 U.S. Open, and might have considered this her last, best chance to collect an eighth major singles championship of her own.

Mouratoglou was asked whether Venus can do that.