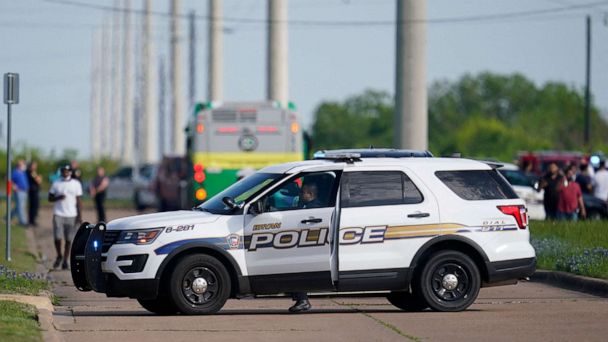 An employee of Kent Moore Cabinets in Bryan, just outside of College Station, allegedly opened fire, killing 40-year-old Timothy Smith and injuring four others at the facility, officials said.


A sixth victim -- a Texas Department of Public Safety officer -- was shot and injured while trying to apprehend the suspect, officials said.

Police on Thursday arrested 27-year-old Larry Bollin, of Iola, Texas, and charged him with murder. He was also charged Friday with five counts of aggravated assault with a deadly weapon. He is facing a charge of attempted capital murder for shooting the DPS officer, as well.

He's being held on $1 million bond for shooting the officer in Grimes County and $1.2 million for the murder charge, according to jail records.

During the shooting, Barron said they came face to face.

"I turned around and he faces me. We made eye-to-eye contact," Barron told KTRK. "He basically turned away from me to shoot."

The Texas Department of Public Safety said its officers tried to take Bollin into custody near Iola at about 3:30 p.m., but the suspect allegedly shot a trooper and fled. Bollin was then found and taken into custody 50 minutes later in the town of Bedias.

A seventh victim was taken to the hospital after suffering an asthma attack.

Two Mexican citizens were among those injured in the shooting. Both are in stable condition, according to the Consulate General of Mexico in Houston.

Amelia Rodriguez, another co-worker, told ABC News, "I don't know how to feel."


"Two hours ago, I thought I was gonna pass out, you know, my legs are feeling weak and everything," she said. "Life is unpredictable, and it can go in a second."

Texas Gov. Greg Abbott said in a statement, "I have been working closely with the Texas Department of Public Safety and the Texas Rangers as they assist local law enforcement on a swift response to this criminal act."

"The state will assist in any way needed to help prosecute the suspect," he said. "Cecilia [the governor's wife] and I are praying for the victims and their families and for the law enforcement officer injured while apprehending the suspect."

"Biden is threatening our 2nd Amendment rights. He just announced a new liberal power grab to take away our guns," he tweeted. "We will NOT allow this in TX."