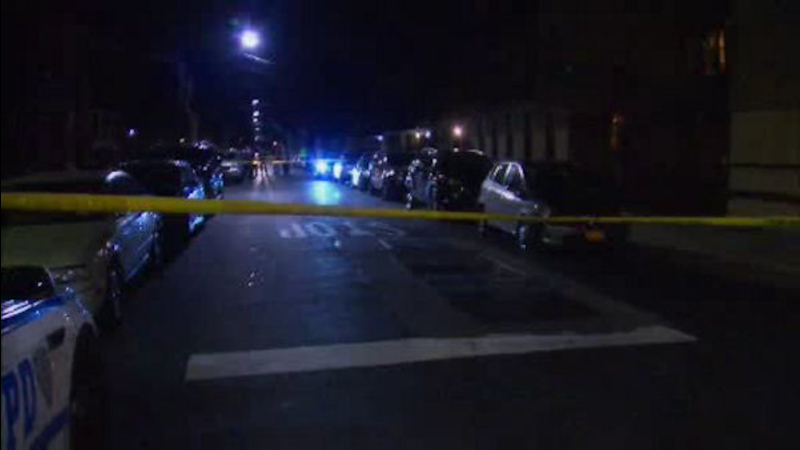 EAST FLATBUSH, Brooklyn (WABC) -- A mother is recovering in the hospital after an apparent murder-suicide in Brooklyn Thursday night that left a friend and the suspect, who is the victim's ex-boyfriend, dead.

Police say the 33-year-old woman thought she was meeting her ex for a custodial exchange when the situation turned deadly, and the violence erupted in front of the couple's two young children

The woman was waiting in her car to pick the kids up on East 91st Street in East Flatbush just after 5 p.m. when police say 39-year-old Jerry Paterson, of Queens, walked over to the vehicle. The mother's friend, 44-year-old Kenly Joseph, was standing outside the car at the time.

Authorities say Paterson shot Joseph in the head and then opened fire into the car.

Police said the suspect then shot into the car, striking his ex-girlfriend.

Joseph was pronounced dead at Brookdale Hospital. The woman is in stable condition at Kings County Hospital and is expected to survive.

According to police, Paterson then walked back to his car, where the two children were waiting, and fatally shot himself in the head.

The suspect and his ex-girlfriend were a longtime couple with no apparent history of domestic incidents.

The children, ages 11 and 6, were not injured. Police have not said who is caring for them now.

The mother has not been identified.

Friends and relatives see this as tragic and not easy to understand.

"To see him one day, yesterday," friend Trevor Gay said. "It's hard. I don't know what to say."

Gay struggles to understand the loss of his longtime friend, as neighbors were left stunned by the tragedy that has engulfed three families.

"To lose a good man like that is hard for me," the victim's cousin, Glenn Alexis said.

Alexis was sweeping up the glass that had been shattered by the gun shots. He says he will miss Joseph's love of music.

"Christmas time comes around, and Mr. Joseph likes to have fun," he said. "He would pick up his guitar, and let's go play."

Gay and Joseph had worked together on construction projects, including the city water tunnel and the Second Avenue Subway.