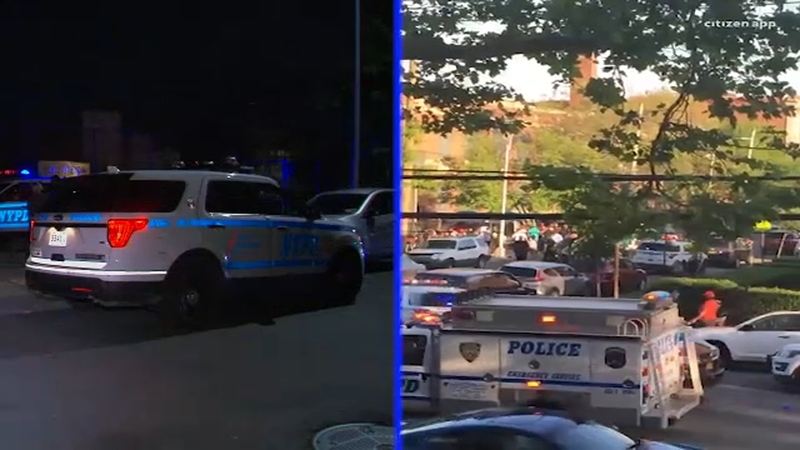 NEW YORK (WABC) -- It was a violent Memorial Day in Brooklyn, where six people -- including teenagers -- were shot in two separate incidents.

Authorities say three people were shot, one fatally, when a man fired multiple rounds toward a group of men barbecuing outside the Pink Houses in East New York.

It happened around 6:50 p.m. outside the park on Hemlock Street and Stanley Avenue.

A 42-year-old man was shot once in the neck and was rushed in critical condition to the hospital, where he later died from his injuries.

A 34-year-old man was shot in the arm while sitting in a car near the scene, and he drove off before being pulled over for driving erratically two blocks away. He remains in serious but stable condition.

A 46-year-old man was shot in the torso, but he managed to walk to the hospital and is in serious but stable condition.

In the other incident, three teens were shot just before 9 p.m. at St. Andrew's Playground on Kingston Avenue and Herkimer Street in Bedford-Stuyvesant.

"We heard like three or four shots, and then me and my homies just ran," said one teen, whose identity Eyewitness News is protecting because of his age. "It was kind of scary because you got little children around, and their moms don't know where they are at."

A 19-year-old man was shot in the shoulder and walked a block away to Interfaith Medical Center.

Another 19-year-old man and a 16-year-old boy were both shot in their right leg and taken to Kings County Hospital.

All three victims are expected to survive.

Two male suspects were spotted fleeing the scene. One was wearing all black, and the other was wearing a white hooded sweater.

Police have not made any arrests in either incident. One woman who walks her dog in the park says that when the weather heats up, so does the violence.