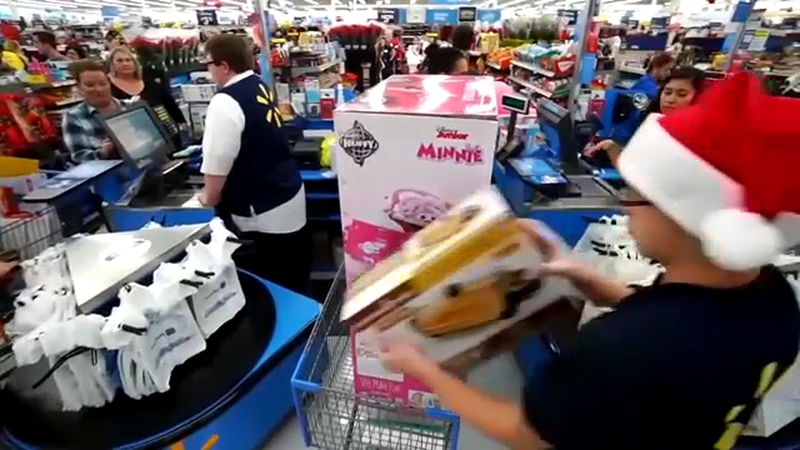 NEW YORK (WABC) -- With one day left before Christmas, last-minute shoppers hit the stores throughout the New York area Sunday in search of those final gifts.

Stores were open early, including Macy's in Herald Square, which re-opened its doors at 7 a.m. Sunday after having closed at 2 a.m.

Many shoppers took advantage of the extended hours this weekend, but the crowds were lighter on Christmas Eve than the day before, known as Super Saturday, the second busiest shopping day of the year in the United States.
EMBED More News Videos

Experts say stores see a more than 60 percent jump in foot traffic the Saturday before Christmas Eve, and retailers across the country expect 53 percent of consumers to hit the stores this weekend.

Shoppers who are feeling good about the economy and spending more than expected on items like kitchen gadgets, toys and coats could make this the best holiday season in several years.

That's good news for retailers, some of which have had few reasons of late to be merry. But there's no question that stores need to keep adapting to how people shop as spending moves online. Customer sentiment could shift again based on how they feel the tax overhaul is affecting them. Tax cuts mean some shoppers may have more money in their pockets, but they could opt to save it instead of spend it.

Experts have issued rosy forecasts for the season. Shoppers seem to be in the mood as unemployment is at 17-year low and consumer sentiment has reached its highest level since 2000.

That could mark the best performance since 2014. And Tom McGee, CEO of the International Council of Shopping Centers, believes mall traffic and sales were higher than last year as shoppers bought electronics, clothing and toys.

The week leading up to Christmas is critical for stores, accounting for more than 20 percent of traffic for the overall season, says ShopperTrak, which monitors foot traffic. Because of the calendar this year, with a full weekend leading into Christmas, retailers also may see more late shoppers.