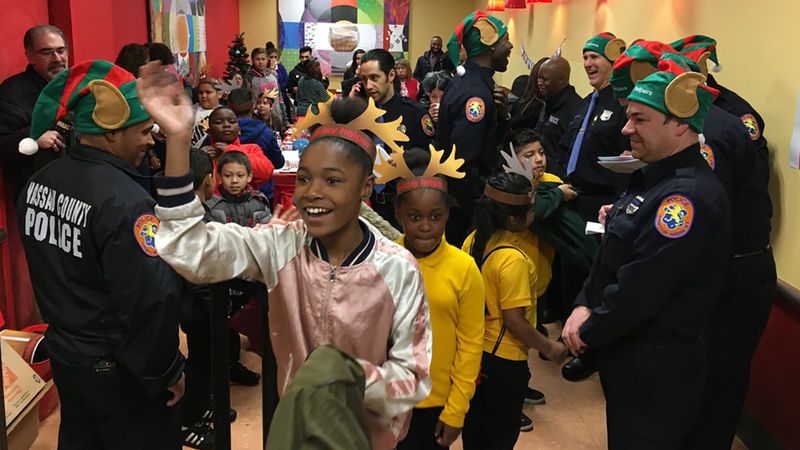 WESTBURY, Long Island (WABC) -- It was like winning the golden ticket.

On Wednesday, 40 kids from Westbury were given the chance to shop with some of their favorite movie characters and superheroes at Target. And they were each given a gift card of $250 to spend.

"I thought I was dreaming," 11-year-old Juelle Denny said. "I almost pinched myself."

The event is called "Heroes and Helpers," and the cost of the gift cards was split by the Nassau County Police Foundation and Target. The goal is to help some of the neediest families in the county.

"With these particular students, they're either homeless status, or financially challenged...or the possibility of being evicted," said Lisa Maldonado, a counselor in the Westbury School District.

Maldonado helped select the qualifying students. For some, like 9-year-old Jeida Woods, shopping with Cinderella was like a dream come true.

The event is also a chance for police, who dressed up as the heroes, to show themselves as role models. Officer Jason Trees, of the 3rd Precinct, dressed as Thor.

"This is that chance, that we can show children that we are more than just police officers," he said. "We're also people. We give back. We're fun."

Many of the kids wanted simple things like pajamas and gifts for their siblings and parents.

Acting Nassau County Police Commissioner Patrick Ryder was also on hand to greet the kids. He called it "a great partnership" between the police department and Target.

The event is in its sixth year, but this is the first time police dressed up as heroes and characters.