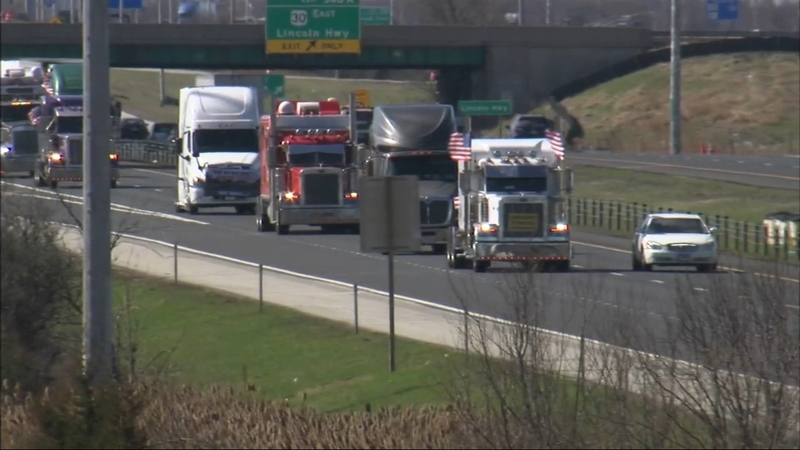 NEW YORK -- Dozens of truck drivers from across the country took it slow on expressways and streets Friday, and they hope leaders in the industry take notice.

The truckers held a "Slow Roll" protest because they are upset over regulations in their industry.

In New York City, truckers lined up outside of the ABC7 New York newsroom on Columbus Avenue between 66th and 67th streets in Manhattan and held their hands on their horns.

"The trucking industry is the most heavily regulated industry in the world," a driver told Eyewitness News anchor Bill Ritter during a Facebook live.

In other cities, there were concerns about the protest slowing down traffic. But traffic in New York is slow that the protest did not appear to cause any such issues.

Another sticking point for protesters is better training programs they say are lacking, creating dangerous conditions for everyone out on the road.

"We cannot do anything without putting it into that electronic logger," said Lori Franklin, a truck driver taking part in the protest. "Our days are numbered. We have to keep track of the clock, then when you do need a place to park, there is nowhere to park because everybody is parking at the same time."

Truck driver Joe Denney says the computer systems used to log their travels are not helping either.

"An electronic logging device is nothing but a glorified babysitter for the mega carriers, because their training programs are so weak," Denney said.

Police had warned the group -- called 'Black Smoke Matters" -- that slow-moving trucks could cause traffic back-ups or crashes. Police said truckers who participate could be held liable for any accidents.

Organizers said there were not any crashes in other slow roll protests in Chicago, Washington D.C., Columbus and Indianapolis.