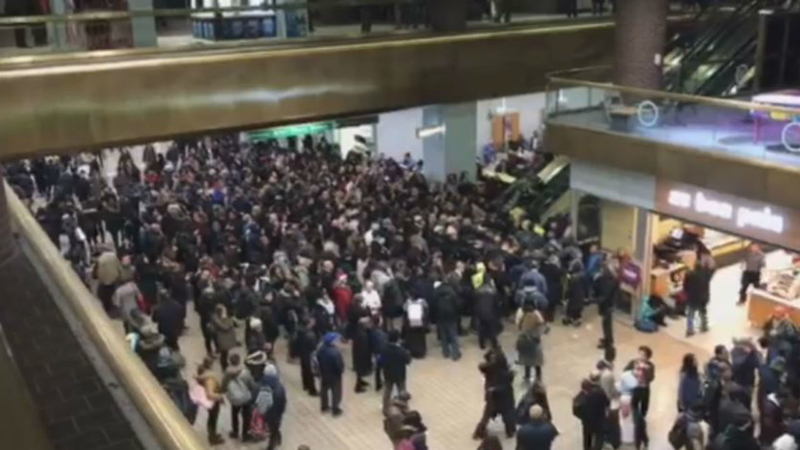 NEW YORK (WABC) -- Snow turned to rain overnight and many woke up to an icy, slushy morning in the Tri-State area Friday. The snow storm Thursday created a chaotic commute home that lasted into the next morning for some.

The snowfall downed countless tree branches throughout the city, causing traffic gridlock in some areas. Police advised people to stay indoors and avoid the roads, if possible.

Crowding finally seemed to improve at Port Authority although delays on buses were expected.

The biggest issue on the roadways Friday morning is the Major Deegan Expressway in the Bronx. Plows cannot properly clear the road due to the number of accidents. People are being urged to completely avoid it if possible. Some people were on the roadway for 10 hours.

Sanitation Commissioner Kathryn Garcia noted in a phone interview Friday morning that the intersection of Major Deegan Expressway and Cross Bronx Expressway was a spot of "consistent" problems "all through the night."

She said the city's snow plows became stuck in traffic on the primary roads. "We were stuck," she said of the Deegan/Cross Bronx intersection. "One of the things we always do on this particular ramp, it can be so treacherous. They were going back and they got stuck. I had salt spreaders that literally were in traffic for hours. So they could not move at all. The basic rule of thumb is -- we cant move, we cant work."

NYC Mayor Bill de Blasio said plows and salt spreaders were out all night to make sure the roads could be clear for the Friday morning commute.

Alternate Side Parking rules will be suspended Friday for snow operations. Parking meters will remain in effect.

Conditions on the Palisades Parkway in Tappan in Rockland County were finally improving Friday morning. There were still several cars involved in accidents that needed to be cleared.

Marcus Solis reports on the storm from Tappan.

The Long Island Rail Road is also back on track after previous delays and cancellations.

Service between Atlantic Terminal and Jamaica remains suspended in both directions due to weather-related switch trouble. LIRR personnel are on scene assessing the situation. We will keep you updated as we learn more information.

Metro-North said it was experiencing delays of 5 to 10 minutes on Friday morning.

New Jersey Transit train service is also back on schedule, although passengers are warned to expect system-wide delays.

In West Orange, I-280 is mostly cleared although there were children that had to stay in their school overnight due to buses not being able to make it on the roads to the school.

Friday morning all of the area airports were reporting some cancellations and delays.
EMBED More News Videos

Eyewitness News team coverage on the snow in the Tri-State area.