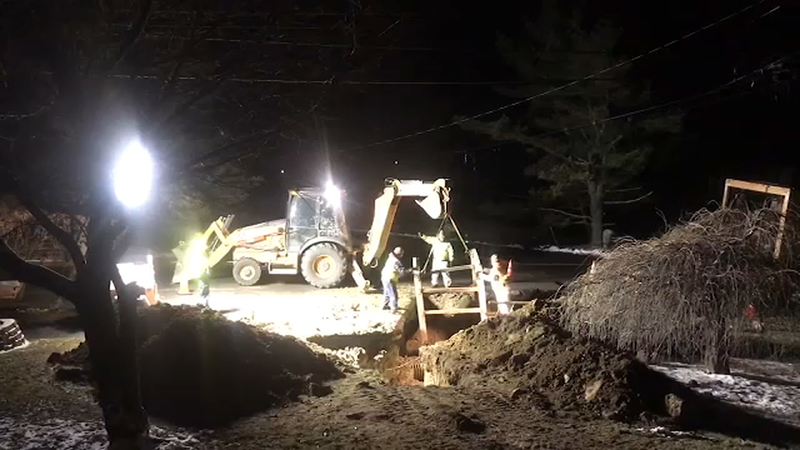 WEST MILFORD, New Jersey (WABC) -- New Jersey resident David Volpe's front yard is a monumental mess -- He has a 3-foot high mound of asphalt at the end of a rock landslide that is right over where his grass and curb should be.

"I've got a crater in my front lawn and two different people telling me its not their fault," he said. "It's a safety issue, and it definitely scares and concerns me every day."

And Volpe is not the kind of guy who scares easily -- he's a former professional wrestler known as the "Hawaiian Hurricane," and he has faced some fierce opponents in the ring. But he wasn't prepared to do battle over this eyesore.

The whole mess began back in January, when Volpe hired a plumber to investigate why raw sewage backed into his basement bathroom. He hired a crew, and they dug up the front yard to discover a broken pipe. But it was in the street, not on Volpe's property.

Suez is the local water company, and Volpe says a supervisor told him to submit all his bills -- totaling $2,900 -- for reimbursement. But then, his claim was denied.

Suez's letter stated it determined that the work that was done was before January 1, and they're not responsible.

Suez said liability would be against the city of West Milford for the broken pipe, since Suez only took over the utility at the beginning of this year. So Volpe filed with the city and got another denial.

"Now I had two rejection letters, each one telling me the other was responsible," he said. "Meanwhile, I'm out thousands of dollars, and my lawn look like this...I'm the little guy, and to fight a township, they have an attorney. I don't have an attorney."

But he did have 7 On Your Side, so we asked both sides to bail him out

"The day after you were out here, they took the asphalt off the lawn," he said.

Suez re-paved the street, repaired the curb and then re-seeded grass. Then he received reimbursement from the town.

Suez said after getting our calls, it went above and beyond, fixing portions of Volpe's front yard it never even worked on.

A representative for West Milford said it paid Volpe's out of pocket expenses as a courtesy and will be asking Suez for reimbursement.

One big takeaway here is that before doing any digging, contact both your town and all utilities before you start. You don't know where underground lines are, and if the problem isn't your doing, you won't have to pay for the work.