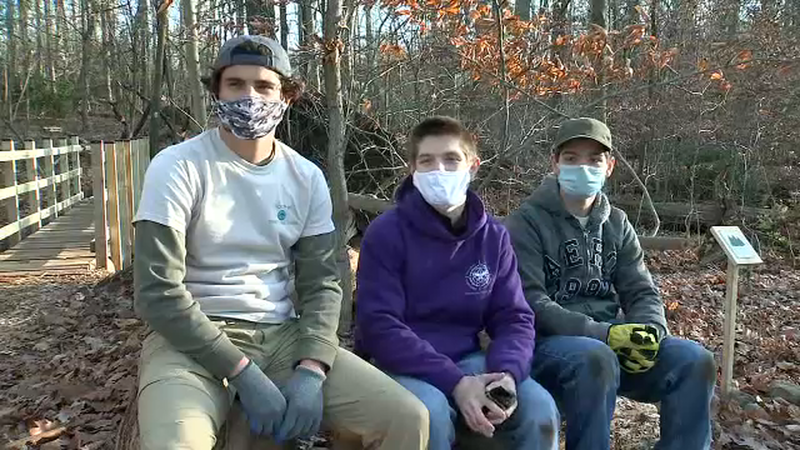 TENAFLY, New Jersey (WABC) -- A New Jersey nature preserve closed for the past eight years due to damage from storms such as Superstorm Sandy may reopen soon thanks to the efforts of a trio of Boy Scouts.

For eight years the Churchill Nature Preserve in Tenafly has been off-limits after storms, like Sandy, left behind too much damage.

But thanks to three Boy Scouts from Troop 86, the preserve is being preserved.
"It's been a huge makeover, I guess a lot of trees have been down and part of the project is clearing that up and making it open for the public," said Rob Cavilla.

Cavilla and his twin brother Alex, along with Esteban Velasco, saw the need and they came up with a plan over the last year.

They and other volunteers have restored a trail, removed fallen trees, and replaced several wooden bridges that washed away in the borough-owned eight-acre preserve. They've also created a new picnic area, renovated benches and put up 30 tree identification signs.

Many of the supplies and equipment were donated. And in October, they got to work, with help from other scouts.

They said the whole experience has been very empowering. The project could also allow them to become Eagle Scouts -- an honor only awarded only to 6% of Boy Scouts.
Their review will be later this year, but at the very least, they know their hard work is benefiting plenty of benefits their community, which is particularly nice during a pandemic

"Our goal is to give back to the community, not only for us, we want to make sure families have memories with their children," Velasco said.

Mayor Mark Zinna said he plans to visit the preserve with the public works director to decide when it will reopen. Zinna, also a Boy Scout in his youth, commended the trio for their efforts in renovating the preserve.

"I think the work they're doing up the Churchill Preserve is important for the community," Zinna said.