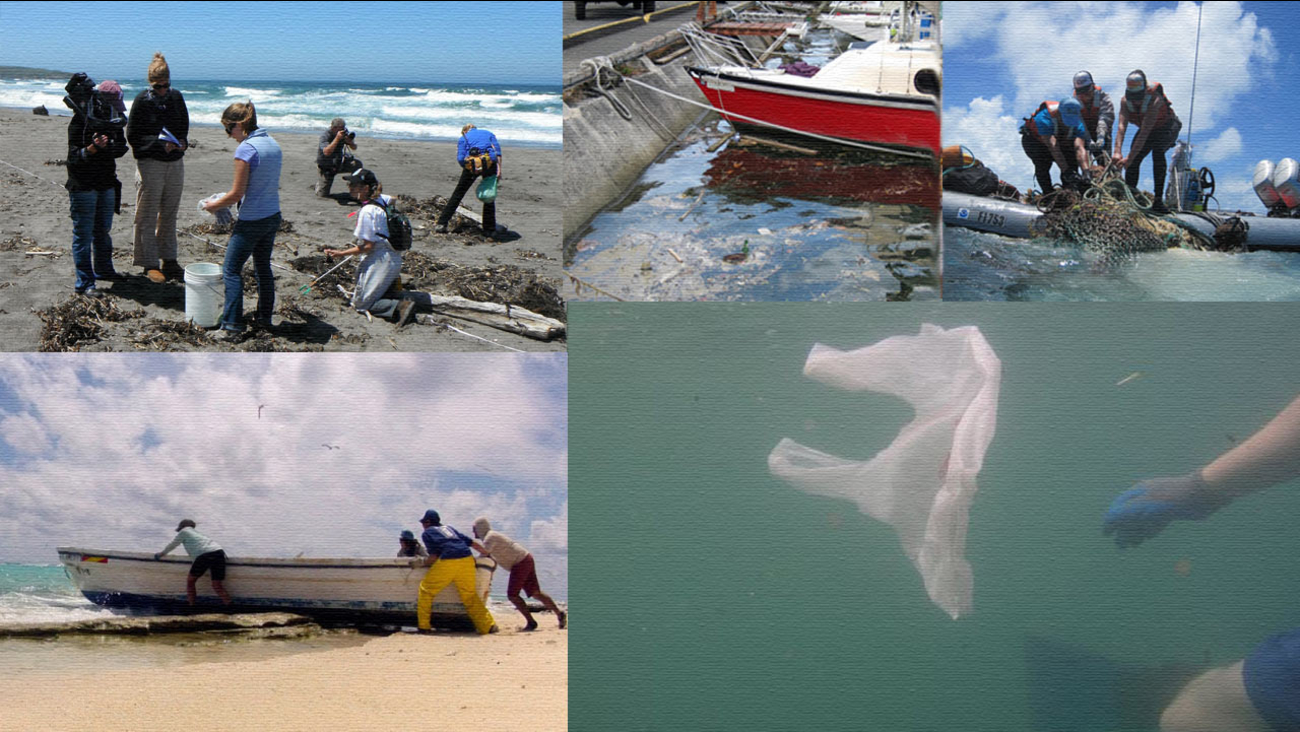 NEW YORK -- From bottles and straws to cigarette butts, fishing nets, and the bags we carry: Marine researchers estimate that millions of tons of plastic garbage are making their way into our oceans every year. What can be done to stem the torrent of debris? It turns out, a lot can be done - and experts say it starts with prevention. The Earth Day Network, a group of organizations joined for environmental action, have chosen "End Plastics Pollution" as the theme for World Earth Day 2018.

The U.S. National Oceanic and Atmospheric Administration is on the forefront of analyzing and combating threats to our waters and coastal ecosystems. The information here is sourced from the NOAA website on ocean pollution.

What is Marine Debris?
Our oceans are increasingly being filled with pollutants: Consumer plastics, metals, rubber, paper, textiles, derelict fishing gear, vessels, and other lost and discarded items are everywhere, no part of the world is untouched. The materials that make up most marine debris are plastics, glass, metal, paper, cloth, rubber, and wood. The majority of the products do not biodegrade entirely, and are so commonly used around the planet that their waste is becoming overwhelming. Plastics are now being noted as one of the biggest parts of our waste stream.

Derelict Fishing Gear, and Abandoned and Derelict Vessels
Along with common consumer items, fishing gear that's tossed into the sea is increasing. Derelict fishing gear refers to nets, lines, crab/shrimp pots, and other recreational or commercial fishing equipment that has been lost, abandoned, or discarded in the marine environment. - along with thousands of derelict boats and other vessels.

How does all this garbage get to our waters?
Wind, gyres, and ocean currents all impact how marine debris gets around. Floatable marine debris items are pulled far from their origin, and garbage accumulates in zones that have been dubbed "garbage patches."

What is the Great Pacific Garbage Patch?
In most cases when people talk about the "Great Pacific Garbage Patch," they are referring to the Eastern Pacific garbage patch. This is located in a constantly moving and changing swirl of water roughly midway between Hawaii and California, in an atmospheric area known as the North Pacific Subtropical High. NOAA National Weather Service meteorologist Ted Buehner describes the North Pacific High as involving "a broad area of sinking air resulting in higher atmospheric pressure, drier warmer temperatures and generally fair weather (as a result of the sinking air)." Recently, environmental teams studying the area concluded that it's growing rapidly - and may now cover an area of water approximately three times as large as France.

From NOAA: Where are the Pacific Garbage Patches?
EMBED More News Videos

What is the Impact?

Economic loss
Marine debris is an eyesore, and can cause economic loss if an area is a popular tourist destination. Coastal communities may not have the resources to continually clean up debris.

Habitat Damage
Marine debris kills wildlife, and damages coral reefs and other habitats. Many of these habitats serve as the basis of marine ecosystems and are critical to the survival of many other species. One of the most notable types of impacts from marine debris is wildlife entanglement. Derelict nets, ropes, line, or other fishing gear, packing bands, rubber bands, balloon string, six-pack rings, and a variety of marine debris can wrap around marine life. Entanglement can lead to injury, illness, suffocation, starvation, and even death.

Ingestion
Many animals, such as sea turtles, seabirds, and marine mammals have been known to ingest marine debris. The debris item may be mistaken for food and ingested, an animal's natural food (e.g. fish eggs) may be attached to the debris, or the debris item may have been ingested accidentally with other food. Debris ingestion may lead to loss of nutrition, internal injury, intestinal blockage, starvation, and even death Microplastics, small plastics less than 5 millimeters long, are an increasingly common type of marine debris found in the water column and on shorelines around the world. Based on research to date, most commonly used plastics do not fully degrade in the ocean and instead break down into smaller and smaller pieces.

What can we do?
The problem may seem daunting, but environmental groups say there are things we can do to prevent and reduce marine debris - from governmental action to lifestyle change.

Join or Lead a Cleanup
Volunteer to pick up marine litter in your local community and help keep our coastlines clear!

Students and Educators
Students and teachers can take active roles in preventing the problem of marine debris. Educating students - and their families - on the importance of understanding and changing the behaviors that cause debris is an important step.

Boatowners and Marinas
Boat and marina owners can commit to helping tackle marine debris in their areas.

Fishers and Beachgoers
Those who enjoy sand and surf can commit to preventing their leisure time from contributing to ocean pollution, and volunteer to help clear shorelines. Keeping garbage out of oceans is a critical step for the future.

Recycle
Recycling is not only a way to reduce your impact, but also a great way to prevent marine debris! Learn to do it correctly.

The Earthday Network is a coalition of groups around the world committed to our environment. They are focusing their Earth Day 2018 efforts on ending plastics pollution around the world, on land and in the oceans. As part of the effort, they're offering people tools to learn about the problem, to estimate their own plastic use, and to organize for change.
* Plastic Pollution Primer - a toolkit; create your Personal Plastics Plan and to track your progress.
* Estimate your plastic use. Create your Personal Plastic Plan and track your progress.
* Get more information on how to organize events to End Plastic Pollution.