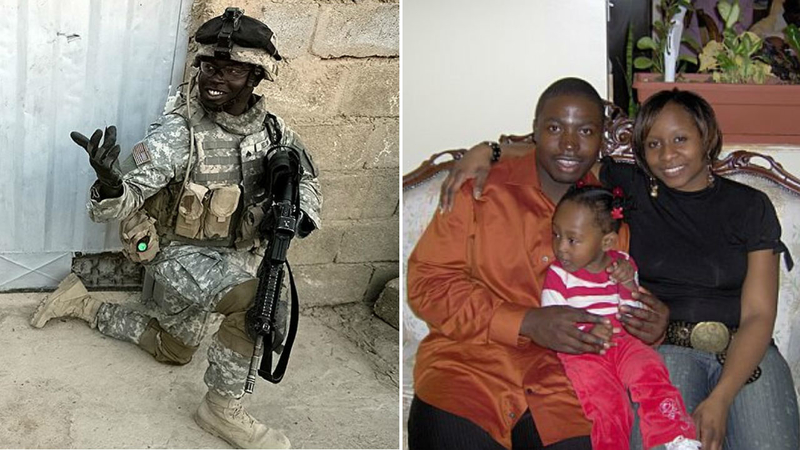 GRANITEVILLE, Staten Island (WABC) -- The family of a fallen soldier who made the ultimate sacrifice was gifted a mortgage-free home on Staten Island.

The family of U.S. Army Sgt. Mario Nelson was presented with the house on Wednesday by the Tunnel to Towers Foundation.

U.S. Army Sgt. Mario Nelson was not born in this country, but bravely sacrificed his life defending it. He was born in Haiti and arrived in the United States as a child where he grew up in Brooklyn.

He enlisted in the National Guard after high school when the 9/11 attacks changed his life.

He volunteered to be a part of the recovery effort at Ground Zero before deciding to switch to active duty with the Army.

He was killed in Iraq when his vehicle was hit by a grenade in October of 2006.

He was 26-years-old at the time of his death and left behind his wife Mecca and their 3-year-old daughter Mia.

Since his death, Mecca and Mia have moved from apartment to apartment and have not had a place to call their own.

His daughter spoke about her mother's sacrifice.

"She played a mother and a father all for me, she would provide me with all these things that I do, she supports me with anything I do and I appreciate her for that, and I just love her, I love my father, I love everybody who came out today, thank you," Mia said.

To date, The Stephen Siller Tunnel to Towers Foundation has spent over $125 million to honor and support our first responders and veterans and their families.

Foundation CEO Frank Siller lost his brother Stephen, a firefighter, in the 9/11 attacks.

"We have to take care of these families," Frank Siller said. "There is still a tremendous sacrifice being made, and this is the way Americans can do it by giving these mortgage-free homes, through the Tunnel to Towers Foundation."