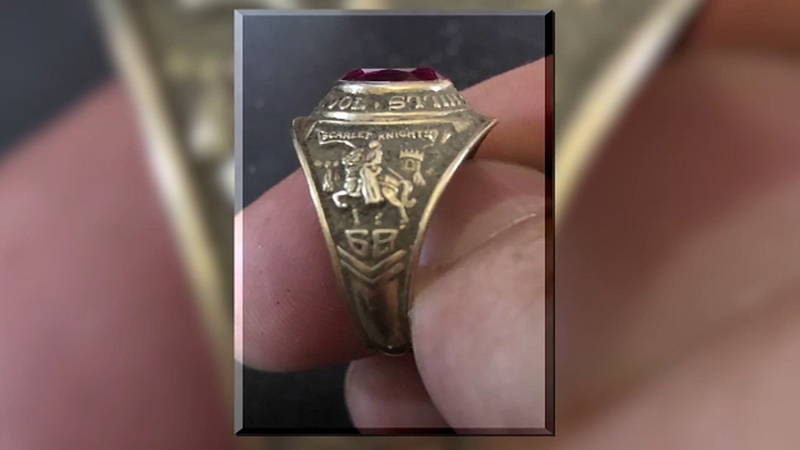 DOVER, New Jersey -- Sometimes you lose something very special and you think you will never see it again.

A New Jersey woman felt that way about her high school ring. Now, Elaine Hoffman, 69, can finally sport her ring she got when she was 18 years old.

"I know we went back to look for it, I do remember that," said Hoffman.

The then18-year-old returned to Hurd Park in Dover, New Jersey several times in a fruitless search of the ruby and 14-karat gold Morris Hills High School ring with the Scarlet Knight mascot on the side and her initials on the other.

Those initials were the only thing Gus Seretis could go by after finding the ring 50 years later while scanning the park with his metal detector this past July.

"Oh my God, gold...take it, clean it off...popped out the little plug inside where the little finger hole is, I see MS. I'm like 'I can return this if I can find the person,'" Seretis said.

Seretis says he could have gotten about $80-$100 for the ring for the price of the 14-karat gold, but he knew it was worth way more than half of it would be to him.

"In the metal detecting community, it's kind of like an unwritten code that if you can return it, you do return it," Seretis said.

He spent two months trying to find the 1968 graduate with the initials 'EMS' and was only able to do so with the help of the Morris Hills High School Alumni Facebook group.

"It was sweet of Gus to take the time to research, find out who it belongs to. HE could have just taken it and gotten money for it, and moved on," Hoffman added.