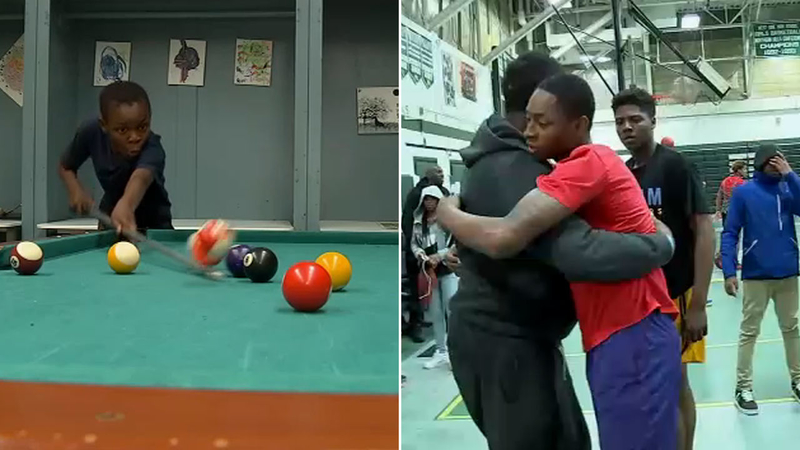 NEWARK, New Jersey (WABC) -- A school full of kids on a Friday night is all part of one man's mission to keep students at a Newark high school off the streets and out of trouble.

Hundreds of kids packed the halls of West Side High School on Friday night because it's a space free of fear.

It's all part of the Lights On program which is now in its fourth year and is open to everyone.

Many would think it's the last place students would want to be, but they are there to avoid what lurks outside of the school:

"Anything that keeps me off the streets I'll do," one student said. "Selling drugs and stuff, I'm not into that."

"I just realized that if I come here I'll see friendly faces," another student said.

Within the walls of the school, every Friday night until 11 p.m., kids can shoot pool, play video games, hit the hardwood, practice cheers or even lay down tracks in a recording studio.

Within in the walls, they can simply laugh.

"If it was around back then, I think that we wouldn't have lost so many of my classmates," Camacho said. "If we had a class reunion right now a lot of my classmates wouldn't be here due to gun violence."

"I haven't lost any more kids to gun violence since the start of the school year," Principal Akbar Cook said.

His name may sound familiar because last summer he installed a free laundry room inside the school after his students were bullied because of dirty clothes which resulted in chronic absenteeism.

Cook says there been a 10 percent increase in daily attendance since he opened the laundry room.

"I was finding out just from being a principal that the kids don't eat during the weekends," Cook said.

The school also serves hot meals to the kids on Friday nights.

During the summer, the program is held three nights a week. It's all made possible by donations from the community and alumni.

It all goes to show what a school can become when the community cares about kids who just want a chance.

"It's fun, safe too. It's better than being out on the streets," one student said.

"On the street it's dangerous, people get killed, you could be killed walking home, gunshots everywhere," one student said.