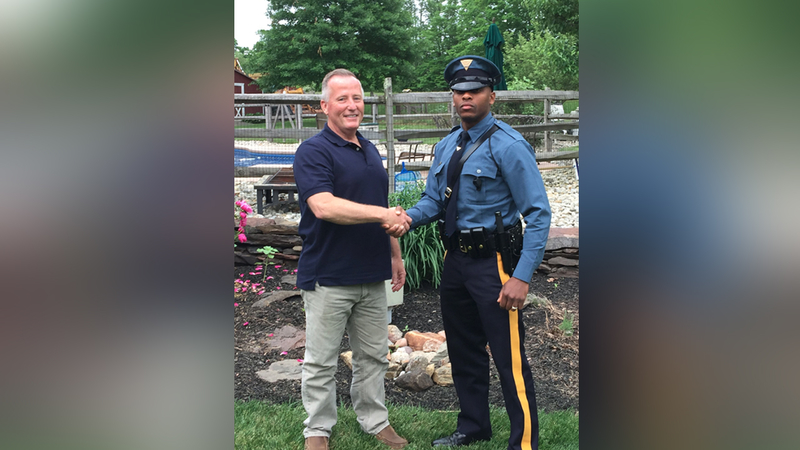 KINGWOOD TOWNSHIP, New Jersey (WABC) -- New Jersey state police have released body cam video of a trooper who pulled over a now-retired police officer who helped his mother deliver him as an infant.

Trooper Michael Patterson was on patrol Friday, June 1 when he pulled over Matthew Bailly for a tinted window violation in Kingwood Township.

In the video, you can hear the two men talking. Bailly mentions he used to be a police officer in Piscataway where Patterson grew up.

LISTEN: The moment Tpr. Michael Patterson realizes he stopped the man who delivered him 27 years ago! #FridayMotivation #FridayFeeling #alert pic.twitter.com/UBEETfhe4t

Bailly was on-duty in Piscataway 27 years ago when he was called to the home of Karen Patterson, who had gone into labor. He helped her deliver Michael Patterson.

As Bailly tells the story, Patterson can be heard to say, "That was me."

"Get the hell out," Bailly replies.

"That was me," Patterson says.

"Get the hell out!" Bailly says once again.

State police say that when Patterson named the block he grew up on, Bailly said he remembered the street, because he helped deliver a baby there 27 years ago when he was a rookie cop.

He went on to describe the color, style of house, and the baby's name, Michael.

Trooper Patterson extended his hand and replied, "My name is Michael Patterson, sir. Thank you for delivering me."