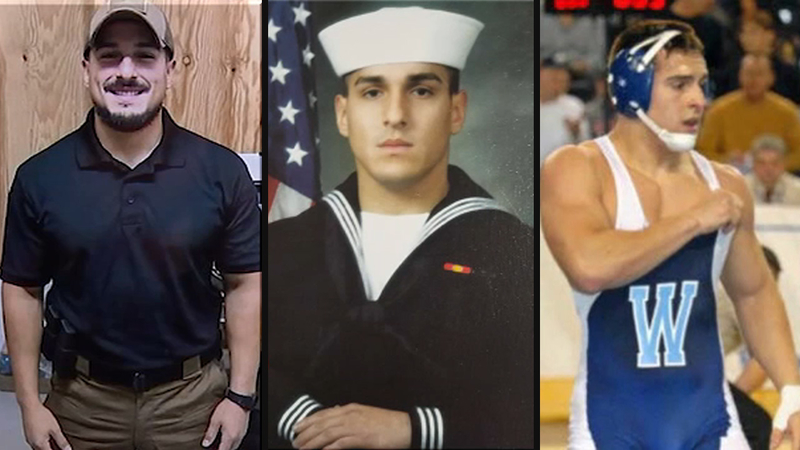 MIDLAND PARK, New Jersey (WABC) -- A New Jersey community is in mourning after a U.S. Navy veteran was killed in Afghanistan on Wednesday.

Kevin Yali, 27, of Midland Park, died while providing private security for American forces in Afghanistan on June 19. Yali had been deployed on four separate occasions during his service.

His family described him as larger than life in love and kindness.

"He used to see homeless guys sitting on the sidewalk, and he says, 'Hold on, I'm going to go to Burger King,'" mom Daisy Yali said. "And he went and he bought meals."

Daisy and Oscar Yali now face the future without their brave son, who chose to defend his country and died doing so.

He represented American defense in some of the most dangerous places in the world, but Midland Park was his home -- where he excelled in wresting and football at Midland Park High School, where flags now fly at half staff for a native son who gave all he had.

"My son was my hero," dad Oscar Yali said through an interpreter. "My son was a missionary...My son was a brave man. He was never fearful of anything. He grew up watching on TV all the military action, and he would always say he wanted to become part of that."

Kevin Yali was born in Paterson, but he had been living in Midland Park for almost 20 years.

Daisy Yali shared the last text exchange she had with her son. She'd played the waiting game before, waiting for Kevin's reply only to get an apology from him much later saying there was no Wi-Fi in the remote region where he was stationed.

Her last message, though -- "This is good. I'm happy." -- remained unanswered.

He leaves behind his parents, as well as siblings Oscar Yali and Victor Patrocino.

Yali's family will receive guests on Wednesday, June 26, from 4 p.m. 8 p.m. at Vander Plaat-Vermeulen Memorial Home. Visitation will be followed by a service at 8 p.m.

Donations in memory of Yali may also be made to his family, addressed to The Yali Family at Vander Plaat-Vermeulen Memorial Home.