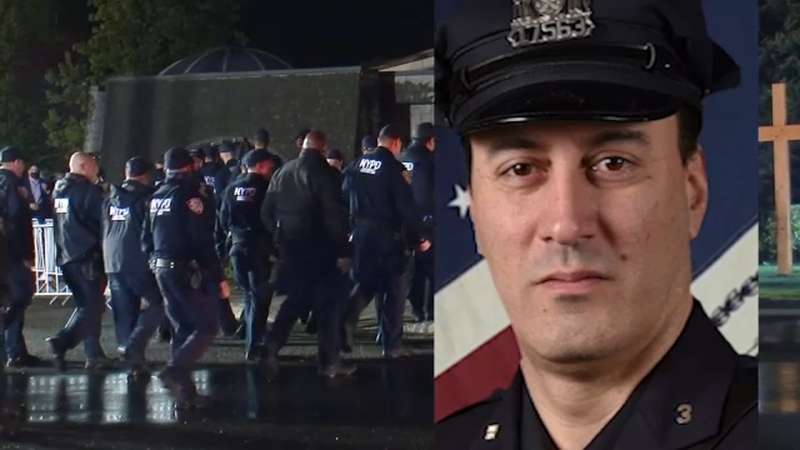 GREENLAWN, Long Island (WABC) -- Thousands of well wishers attended a wake Monday for NYPD Officer Anastasios Tsakos, who was killed in the line of duty when he was struck by an alleged drunk driver on the Long Island Expressway last week.

The viewing was held at St. Paraskevi Greek Orthodox Shrine Church, located at 1 Shrine Place in Greenlawn, where funeral services will also be held at 10 a.m. Tuesday.

"He was one of the best of us, complete gentleman," said NYPD Lt. John Pappas, who worked with Tsakos. "He never looked for recognition. He would always be there to help people."

Dozens of officers lined up and saluted as Tsakos' body arrived at the church. Area residents also arrived early to support the family.

"We back the blue, heart and soul," Huntington resident Priscilla Jahier said. "My husband is a Navy vet, and it's very, very important for us to show our support."

Kelly Fokianos also stood outside the church. Her husband worked with Officer Tsakos in Highway 3.

"They put their lives on the line every day, and this could have happened to anyone," Fokianos said in tears.

Tsakos, a 14-year veteran of the force, leaves behind his wife, Irene, a 6-year-old daughter and a 3-year-old son. His parents live in Greece and are on Long Island for the services.

Tsakos was diverting cars off the highway after a previous fatal crash when he was struck by 32-yea-old Jessica Beauvais, who police say admitted to drinking wine, vodka and tequila before getting behind the wheel.

"He didn't deserve this," brother Teddy Tsakos told Eyewitness News last week. "He just bought a house. He was starting his life. He was doing good. Everything was cut short. That's it."

Beauvais is now facing 13 criminal charges and both confessed and apologized as she was walked out of the police precinct.

Those who knew the officer were stunned by the news.

Tsakos and his family had just moved to their East Northport neighborhood and made a quick impression on their neighbors.