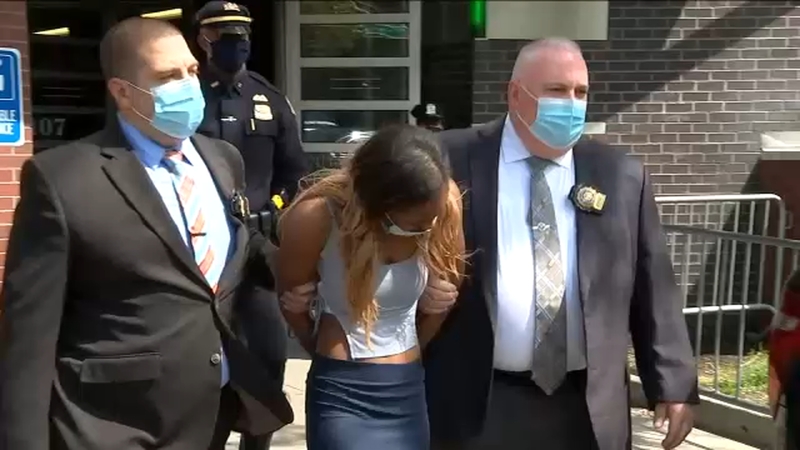 FRESH MEADOWS, Queens (WABC) -- Sorrow is setting in for a family and a city following the shocking death of veteran NYPD Officer Anastasios Tsakos, who was struck by an alleged drunk driver as he directed traffic on the Long Island Expressway early Tuesday.

The driver, 32-year-old Jessica Beauvais, initially fled the scene but was caught a short distance away. She has reportedly admitted to drinking and smoking marijuana before getting behind the wheel.

She told police she knew she hit something but was unsure of what it was, even though Tsakos was in full reflective gear, next to a marked police car with flashing lights and a series of cones.

Queens District Attorney Melinda Katz has now filed 13 criminal charges against Beauvais, who apologized and confessed to killing the officer as she was walked out of the police precinct.

Tsakos was diverting cars off the highway after a previous fatal crash, in which a 26-year-old male passenger died when the driver of an Infiniti slammed into a pole.

"He didn't deserve this," brother Teddy Tsakos told Eyewitness News. "He just bought a house. He was starting his life. He was doing good. Everything was cut short. That's it."

Beauvais also hosted a podcast that authorities say had anti-police rants, but they do not believe that was related to the alleged crime.

"We stand here this morning reminded once again, in law enforcement, there is no such thing as a routine job," NYPD Commissioner Dermot Shea said. "We stand here devastated and trying to pick up the pieces of what is a shattered home and a shattered NYPD family."

According to prosecutors, Beauvais drove into the officer at full speed, caving in her windshield and sending his body flying 100 feet as other officers dove out of the way.

When cops finally caught up with her, she had jumped a curb and then put her car in reverse and rammed a police car twice. After they had her in custody, she is captured on body-worn camera saying "What did I do?"

"I smoke weed regularly," she said, according to court documents. "I drank two glasses of wine earlier today and then dropped my son off in Hempstead. I smoked a joint last night before my podcast that I did in Brooklyn; the podcast was from 6:30 to 8:30 p.m. I brought the bottle of wine I had with me to the podcast. I had two shots of 1800 patron tequila. When I left, I didn't know where I was going so I used my GPS. I made a left turn and a right turn and ended up at a gas station where the cops stopped me. I don't know why they stopped me, speeding I guess. I did hear a thump, so I knew I hit something but I didn't see what it was."

Authorities say she blew a .15 BAC, nearly double the legal limit, more than two hours after the incident.

Those who knew Tsakos were stunned by the news.

Officer Tsakos, a 14-year veteran of the force, leaves behind his wife, a 6-year-old daughter and a 3-year-old son.

Beauvais is facing a slew of charges, including two counts of vehicular manslaughter and DWI. She faces up to 15 years in prison if convicted.