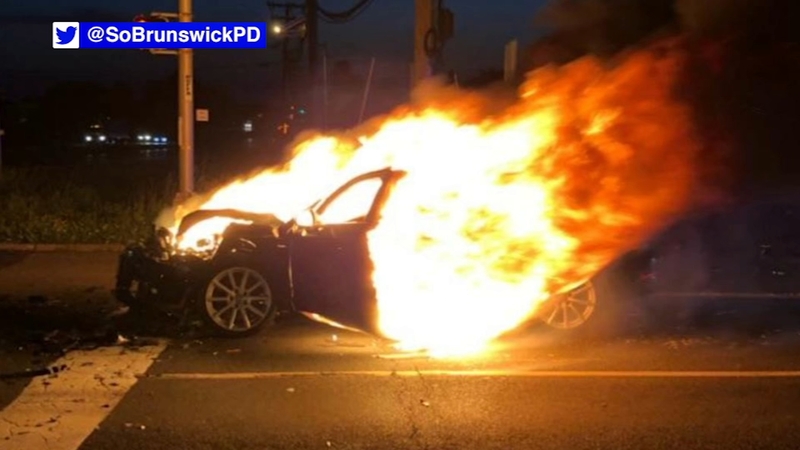 SOUTH BRUNSWICK, New Jersey (WABC) -- A New Jersey corrections officer is being hailed as a hero after pulling a driver from a fiery crash.

Police tweeted out a picture showing the car engulfed in flames at Route 535 South at the intersection of Route 32 in South Brunswick around 9:15 p.m. Sunday.

Fast actions by a State Correction Officer saved the life of this driver Sunday night. The crash on Rt 535 sent the driver to the hospital and closed the road at 9pm. More details Monday. pic.twitter.com/U8k9UPzDwN

Authorities say Donald Carson was off duty when he witnessed an Audi driven by 59-year-old Catherine Bohar crashing into the back of a tractor trailer. Bohar's air bag deployed, rendering her unconscious.

Carson was driving past the crash and observed Bohar slumped over at the wheel and her vehicle beginning to catch fire. He then exited his vehicle and was able to unbuckle Bohar's seat belt before pulling her from the car.

"So I just went with my gut and said 'Let's get her out as soon as I can' and just got her out," Carson said. "But it was definitely scary, one of the scariest times of my life."

Bohar suffered a wrist injury and was transported to a local hospital.

The roadway was closed for two hours as the Monmouth Junction Fire Department put out the fire.

"Donald Carson's quick actions prevented a tragedy," he said. "His selfless actions were able to help save the life of Catherine Bohar."