10 things we learned at the NHL board of governors meetings 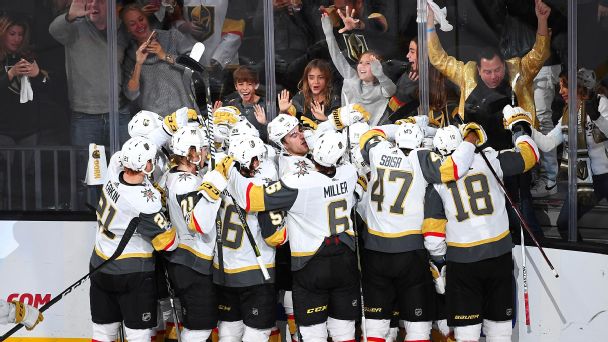 MANAPALAN, Fla. -- The NHL's board of governors met for two days this week at a beachside resort in Southern Florida. And it seemed all anyone wanted to talk about is which city could be getting a new NHL franchise (and which ones won't) -- as well as if any teams could be on the move. Here are 10 things we learned:

1. Seattle should be getting an NHL team. It was a swift ascent to inevitability for Seattle, a city the NHL had long coveted but could never secure without a singular ownership group or an arena. But once the Oak View Group received approval from the Seattle City Council for a $660 million renovation of KeyArena, the NHL pounced, inviting the group to apply for expansion and allowing it to conduct a season-ticket drive. "You'll all handicap the likelihood of it being successful or not," commissioner Gary Bettman said. "I can't stop that speculation." Three years ago, Bettman allowed Bill Foley's Las Vegas group to conduct a season-ticket drive, but did not invite it to apply for official expansion yet. That the league offered both of these steps to Seattle at once? I'd handicap the odds of Seattle landing a team at very, very high.

2. The NHL is basking in the success of the Vegas Golden Knights. They are a surprising success on the ice -- and they might be winning just as big off of it. Here's one way to quantify it: When Vegas entered the league this season, its expansion fee was $500 million. If Seattle enters the league (the goal is for the 2020-21 season) the league is projecting the worth of a franchise to be 30 percent higher. Seattle's price tag is $650 million.

3. The Carolina Hurricanes aren't going anywhere. Dallas billionaire Tom Dundon has signed a purchase agreement to buy a majority stake in the Hurricanes from longtime owner Peter Karmanos, which is great if you're a 'Canes fan because it gives the team stability. But if you're concerned that Dundon might uproot the team -- let's say, to the Lone Star State -- think again, says the commissioner. "This is not a team that is being moved," Bettman said Thursday. "The rumors that it might be moving somewhere else are absolutely incorrect, made up, fabrications, wrong, wrong, wrong. The club is not going anywhere with Mr. Dundon's purchase. ... The fact that he lives in Dallas, and that happens to be in the same state as Houston, has nothing to do with anything. He's buying the club to have it in Carolina." Reaffirming Bettman's point: there is specific clause in the owner's consent agreement that says once you buy into the league, you will not apply for relocation for seven years. (This clause isn't specific to Carolina, but is a standard provision.)

4. Houston is on hold -- for now. The city generated headlines lately because of itspotential interest in luring an NHL team, but Bettman said Houston was barely brought up during Thursday's session. "I had gotten a question about [whether we] had we been in contact [with Houston], and I said, 'Just very generally,'" Bettman said. "There is nothing going on right now with Houston."

5. Quebec City is on hold -- again. And it doesn't sound promising for the immediate future. When asked if Quebec City could get back in the expansion process this round, Bettman was blunt: "Our plan is just to look at Seattle at this point in time." Technically, Quebec City applied for expansion at the same time as Las Vegas, and the league had deferred Quebec City's proposal. "I don't think today's events have any impact on Quebec City," deputy commissioner Bill Daly said Thursday. "If I wanted to be positive, I'd say one of the things we kept harping on is that we need another team in the West before we consider expanding in the East. If, if, if Seattle submits an expansion application and is approved by the board, then you have your other team in the West and you've solved your balance issue."

6. Bettman is committed to having the Arizona Coyotes stay in Arizona. When asked how much patience he has regarding the Coyotes, the commissioner deadpanned: "I have infinite patience." It's clear that Bettman doesn't want to relocate this team -- remember, the franchise is one of his Sun Belt babies, so it behooves him to make it work. "They are still working on getting a building in Arizona," Bettman said. "And so I don't view [the Coyotes] right now as a candidate for moving."

7. Trouble could be brewing in Calgary. If you're a Calgary Flames fan, how could you be encouraged by this quote from Bettman? "As I think everybody knows, the club has stopped the pursuit of a new arena because they think it's futile," he said.

8. The NHL is in limbo with the New York Islanders. If you're looking for an update on where the Islanders could be playing next, well, the NHL is, too. "Right now, it's kind of in the hands of the public authorities in New York as to whether they're granted an RFP for the Belmont Project," Daly said. "We're not in control of that timeline. We expect that, at some point in time hopefully in the not-too-distant future, there will be a decision coming."

9. Expect the Ottawa Senators to be the next team to ask for a new arena. There was some speculation earlier in the year that the Senators might be up for sale. Instead, it seems that owner Eugene Melnyk is keeping the team -- and campaigning for something else. "I think on some level Eugene Melnyk is disappointed, based on how well the team performed last year," Bettman said. "But it's also what's driving the motivation behind wanting a new arena downtown in a place that is more accessible."