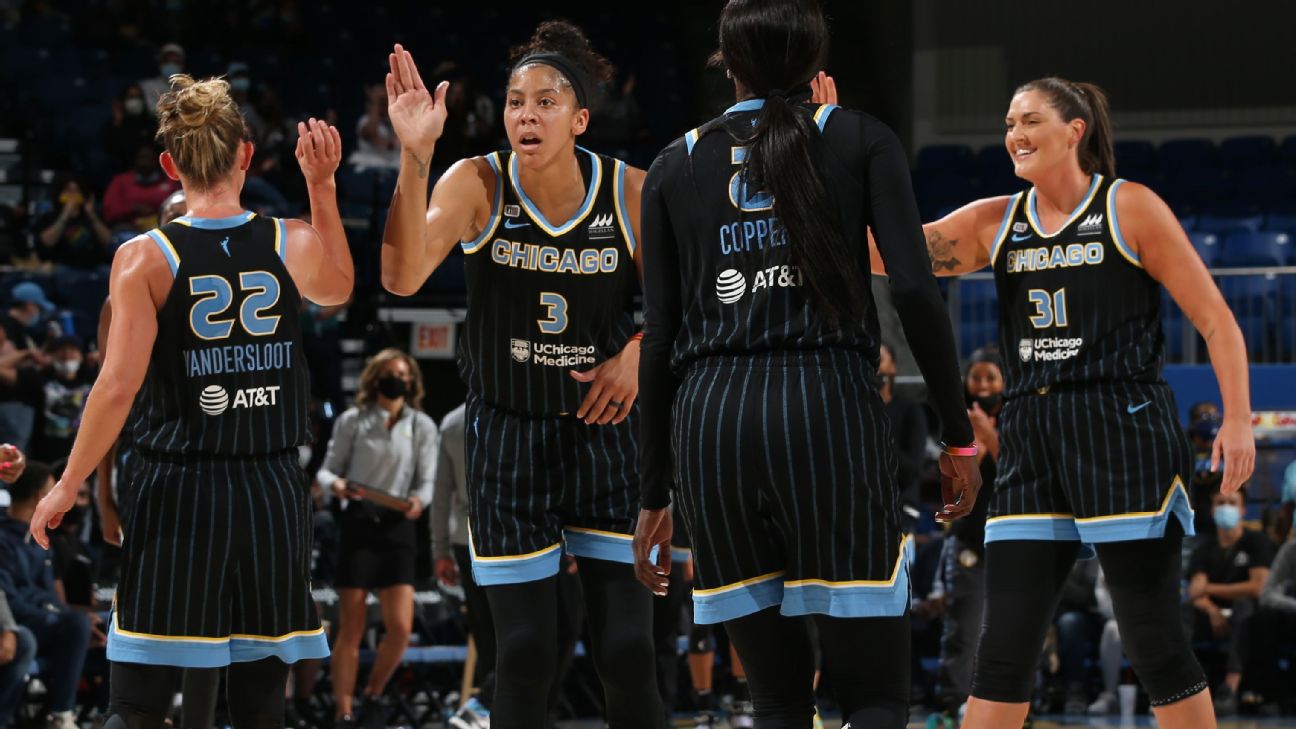 Candace Parker is far from content. The Chicago Sky star had just helped her team advance to the second round of the 2021 WNBA playoffs, but she was slow to celebrate after Thursday's 81-64 victory.

"What's there to be happy about?" Parker said. "We won one playoff game."


And things only get tougher for Parker's sixth-seeded Sky -- as well as the No. 5 seed Phoenix Mercury, who also won Thursday to reach the second round. Both teams hit the road for another single-elimination game.

The defending champion Seattle Storm, the No. 4 seed, host Phoenix on Sunday (3 p.m. ET, ABC) in a game that could pit WNBA legends Sue Bird and Diana Taurasi. The Sky play at the third-seeded Minnesota Lynx (5 p.m. ET, ESPN2), a game that also features a matchup of two of the greatest all-time players in WNBA history, as Parker squares off against Sylvia Fowles.

Taurasi (ankle), who has been limited to 16 games this season because of injuries, sat out Phoenix's game Thursday, wearing a boot on the sideline. And we're monitoring the status of Seattle's Breanna Stewart (foot), who has been out since suffering the injury on Sept. 7.

We take a look at what to expect and what might impact Sunday's second-round games, and predict which teams will win.

What player impressed you most in Thursday's first-round wins and is someone who will impact the second round?

Voepel: Kahleah Copper was 10-of-14 from the field for Chicago and the top defender for the Sky. She had a strong performance and will be a crucial factor if Chicago is to upset Minnesota.

But Candace Parker was just so omnipresent in Thursday's game with 11 points, 15 rebounds and 7 assists. And she will need another big game to try to get Chicago into the semifinals.

The Sky and Lynx met twice in the regular season, with Chicago winning 105-89 on June 15, and Minnesota winning 101-95 on Aug. 21. Parker had 12 points and seven rebounds in the first game and was out with an injury for the second.

Sophie Cunningham was the other player who stood out Thursday. The Phoenix guard made 6 of 7 3-pointers and scored a career-high 21 points. With Taurasi (ankle) out, the Mercury needed offense and Cunningham was able to provide it, along with the usual competitive fire she brings.

Cunningham wore No. 3 up until her WNBA career, as that number belongs to Taurasi in Phoenix. Now No. 9, Cunningham did her best Taurasi impersonation Thursday, shooting from long range (and picking up a technical).

The Mercury now hope that Taurasi will be back to face Seattle. But with or without her, getting more big 3-pointers from Cunningham will help Phoenix a lot.


Cohen: Courtney Vandersloot impressed me the most. She's the best point guard in the league and proved that Thursday. Her ability to slash through defenders was simply fantastic, especially in the third quarter when the Sky looked uninspired and struggled offensively on the boards. Vandersloot finished with 17 points, 8 rebounds and 6 assists. Vandersloot's ball movement will be crucial against Minnesota, which has a solid defense.

What's the key matchup that will determine the Chicago-Minnesota second-round game?

Voepel: Two of the greatest players in WNBA history -- the 1-2 picks in the 2008 draft -- meet again. That's Parker and Sylvia Fowles, whose rivalry goes all the way back to their SEC days at Tennessee and LSU.

While the 6-foot-6 Fowles is the classic low-block center and Parker is a mobile 6-4 forward/center, they will contend with each other in the paint. Fowles had 14 points and nine rebounds in the first meeting with the Sky and 15 and six in the second.

Parker turned 35 in April, and Fowles will be 36 in October. While both are still two of the most feared players in the WNBA, we don't know exactly how much longer we have left to see them, so relish every opportunity (this theme will be repeated in the other second-round matchup).

Cohen: I'm going with a key stat instead of a key matchup: turnovers. The Sky and Lynx both average about the same amount of giveaways. Both teams average around the same in points off turnovers. So whichever team takes better care of the ball will win.

With Diana Taurasi and Breanna Stewart nursing injuries, what will decide the Phoenix-Seattle matchup?

Voepel: Taurasi was forced to watch the Mercury walk a tightrope in holding off an upset attempt by New York on Thursday. Will she get to face off against longtime friend and UConn/USA Basketball teammate Sue Bird on Sunday? With Taurasi at 39 and Bird turning 41 in October, we don't want to take for granted them matching up again. Especially since the Storm and Mercury have such a playoff history against each other that has helped define some of the biggest moments of their WNBA careers. Nobody who saw it will forget the teams' epic battle in Game 5 of the semifinals in 2018, when Bird took over the fourth quarter.

If Seattle has Stewart, that gives the Storm the edge. But without her they have to play a different way, relying even more on their perimeter shooting and hoping second-year center Ezi Magbegor can give them good, quality minutes. She did that in two of the Storm's final three games, scoring 15 points in each.

The Mercury don't necessarily have to play differently if they don't have Taurasi. They just have to depend on other guards hitting enough shots, which they did Thursday.

Cohen: I'm looking forward to two matchups. Phoenix's Skylar Diggins-Smith and Seattle's Jewell Loyd are quite familiar with one another's game, not just because they were on the USA Basketball gold-medal winning Olympic team this summer, but because they overlapped as stars at Notre Dame. They both ended the regular-season on hot streaks, and their matchup in the backcourt will be intense and thrilling.

The matchup in the paint between Phoenix's Brittney Griner and Seattle's Mercedes Russell should be another X factor. Griner had a slow start against the New York Liberty, struggling against their quick double teams and swarming defense. But she finished with a double-double and added three blocks. When the Mercury were struggling early, they looked their best offensively when the ball was running through Griner.


The last time these two teams played, on Sept. 17, neither Griner nor Russell played good defense against one another. Griner was 10-of-16 from the field and Russell was 7-of-9. This post matchup should be a good one.

Which team are you picking to win each game, and why?

Voepel: Minnesota was the favorite for several years with its dynasty teams. Now, the Lynx are more likely to try to embrace the "overlooked underdog" role, even though they are the No. 3 seed. Nobody's buying it, though; the Lynx are a really good team and got a boost when injured guard/forward Aerial Powers returned Aug. 21. In eight of the 10 games since she returned, she has scored in double figures, including a career-high-tying 27 points in the regular-season finale.

The Lynx probably have a little better idea what they will get from everyone, where the Sky have the Diamond DeShields factor: Will she be more like the player who scored 30 in their regular-season finale or the one who was 1-of-8 for four points Thursday?

It all adds up to me giving the edge to Minnesota in this game.

As for Phoenix-Seattle, so much depends on Taurasi and Stewart and whether they play. But even if they don't, we'll see if Griner can will her team to victory, because she will be such a critical part of the Mercury trying to win in Seattle.

Ultimately, I lean a little toward the Storm to take this one, but it could go down to the wire like the first-round game between the Mercury and New York.

No. 1 seed Connecticut and No. 2 Las Vegas will be watching to see who's next for them. The Sun and Aces earned the double bye, so both will be balancing their rest with their preparation for the remainder of this week.

Cohen: I predicted the Lynx to reach the conference finals in ESPN's playoff predictions heading into the postseason, but the Sky and Lynx are a lot more evenly matched than I realized -- especially when it comes to their bench players. But Minnesota has a better defense -- though it's by a slim margin -- and is my pick to beat Chicago.

At the beginning of the week, I was certain Phoenix was going to upset Seattle should they meet, especially without a fully healthy Breanna Stewart. The Mercury had to pull out some late-game heroics Thursday to win their first-round elimination game. That would normally cause pause, but after such a gutsy win, I think they ride that high right into a Storm upset. 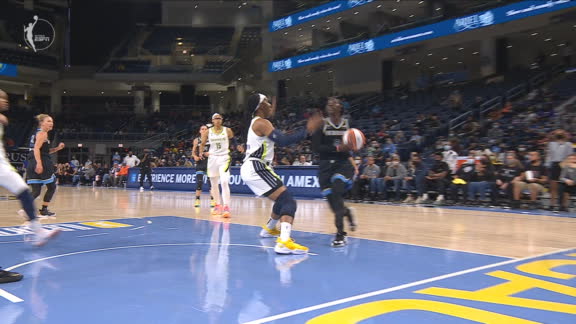 Copper is fired up after and-1
Kahleah Copper flies in for the and-1 and shows her emotion afterwards. 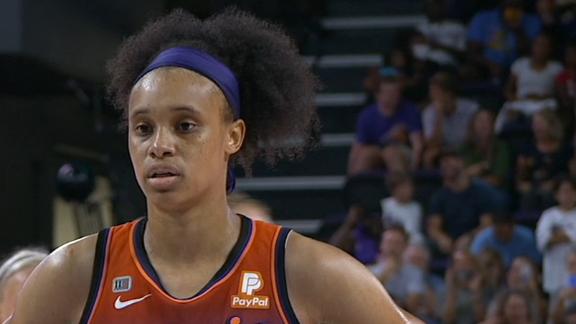