3 candidates to be new MLB commish 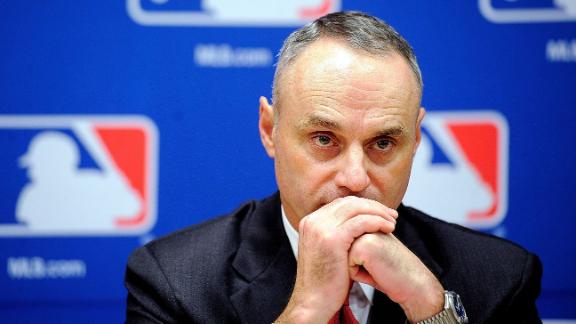 Bud Selig's successor as commissioner of baseball is expected to be decided next week, sources confirmed, when MLB owners assemble in Baltimore to vote on three finalists for the job.

The three final candidates, according to one source familiar with the vote, are MLB's chief operating officer, Rob Manfred, MLB executive vice president for business Tim Brosnan and Boston Red Sox chairman Tom Werner. The identity of the three finalists was first reported by USA Today.

Owners will vote on those candidates Aug. 14, the final day of the quarterly owners meetings. A candidate needs 23 of the 30 votes to get elected. Manfred has long been viewed as the favorite to succeed Selig. However, a dissenting group, which sources say has been led by Chicago White Sox chairman Jerry Reinsdorf and Los Angeles Angels owner Arte Moreno, has nominated Werner for the job and has been working behind the scenes to rally the eight votes needed to block Manfred's election.

If no candidate is elected on the first ballot, owners would have to hold a second vote -- and possibly more -- until a candidate is finally elected, in a process some people in the sport have jokingly likened to the way the College of Cardinals elects a pope.

Selig, 79, announced this past September that he would step down as commissioner when his term expires in January 2015, then silenced the skeptics about that announcement by forming a search committee in May. At the same time he announced his impending retirement, Selig elevated Manfred to a new position as baseball's COO, a promotion that seemed to signal the commissioner's endorsement of Manfred as his successor.

Manfred had spent the previous 15 years as MLB's executive vice president of labor relations and was the point man in negotiating three consecutive labor agreements without a work stoppage for the first time since the rise of the Players Association in the 1970s. Manfred has been to Selig what Adam Silver was to former NBA commissioner David Stern -- a longtime trusted aide who negotiated labor deals, handled crises such as the Dodgers' bankruptcy saga and was intimately involved in major issues ranging from drug testing to revenue sharing. Manfred has taken criticism in recent months, however, for some of the methods baseball employed in its controversial Biogenesis investigation.

Brosnan has worked in the commissioner's office for 23 years and has had his hands in every significant broadcasting, licensing and sponsorship issue for more than a decade. He also has been heavily involved in the globalization of the game. Werner has been a member of the Red Sox ownership group for 12 years. He had previously owned the San Diego Padres for more than a decade. Before he got into baseball, he led a television production company that created a number of hit sitcoms, including "The Cosby Show" and "That '70s Show."

The search committee also made contact with potential candidates outside baseball, sources said. But it became clear to both the committee and those candidates that owners were not going to be comfortable electing someone who didn't come from baseball's inner sanctum. Therefore, in little more than a week, the election of Selig's successor as commissioner will come down to a choice among three men who have worked in baseball for more than two decades.