A survival guide to life in high-stakes Yankees bullpen 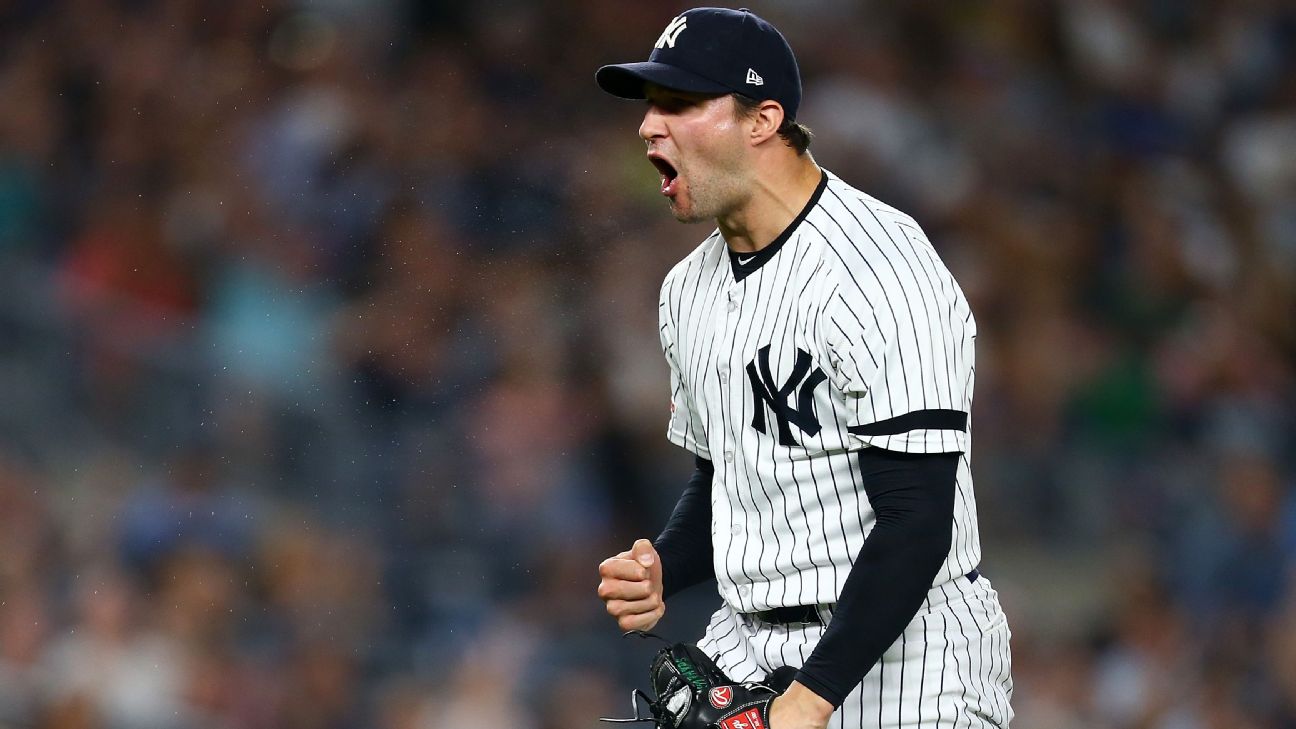 The New York Yankees are known for having one of the powerhouse bullpens in the majors, with names that read like the stuff of hitters' nightmares: Chad Green, Zack Britton, Adam Ottavino, Tommy Kahnle and Aroldis Chapman.

And now that veteran starters CC Sabathia and J.A. Happ will likely join their ranks ahead of the playoffs, they will experience firsthand the extreme level of focus that it requires to ... put up with Kahnle's antics, not touch Britt's water, stay clear of Chappy Island and make sure your fantasy football trash talk is up to par.

It all starts with the bullpen boss, Mike Harkey, who sets the tone by making sure there's levity in such a pressure-cooker environment.

"We don't have too many rules, but the first rule is whatever Hark says goes. He is the ringleader out there," Green said. "So Hark likes playing jokes on guys like saying you're going to pitch but you don't really pitch. Guys get super nervous! When the phone is about to ring everybody is on edge because you don't really know; as soon as the phone rings your heart drops."

"It's one of the funniest things when they call down and he'll say whoever's name. And I hope he pulls it on CC one time; I really do. I really want to see his reaction," Britton said.

"I've been doing that for over 10 years, I used to even do it to Mo!" Harkey explained. "Especially on a day when Mo was off or he wasn't pitching, the phone would ring and I would say, 'Mo.' And he'd give me that 'No chance' look. I still do it to Kahnle and Chappy sometimes."

Now in his 10th season as the Yankees' bullpen coach, having held the position from 2008-13 before returning in 2016, Harkey has learned to cherish the personal aspect of his role.

"Obviously, because you're not the pitching coach, most of the time you're not in charge of scouting reports and stuff like that. So the biggest job of a bullpen coach is that you need to be more of a motivator, a psychologist," Harkey said. "You're with the guys right up until the very moment they have to go in the game, and frequently it's in high-leverage situations. So to be able to find out what it is that helps them relax or helps them feel more confident when they're going into the game, that's probably the biggest thing."

"To be an elite reliever it takes a lot of confidence and a short memory, and that's the environment we create for them," Harkey added. "It's fun to watch friendships develop and their relationships develop. Since Otto's [Ottavino] come here, since Tommy's come back here, since Britt's [Britton] come here, since Chappy's [Chapman] come back, all these guys are able to be really close and they dig each other and don't take it personal. It's kind of made it for a very light bullpen. That makes it easier for these guys to cheer for each other."

"I know I haven't had many bullpen coaches, but he's the best," Chapman said about Harkey. "He is always happy. He is always laughing and telling jokes. I can't wait for CC to be back there because their laughter together is unreal. I laugh just thinking about it. Harkey's laugh makes the bullpen tremble. And when CC laughs it's three times louder. It's going to be great."

"Everyone getting along and keeping things light and fun are important factors in a good bullpen," Britton added. "It's a long season, so it's not like you agree on everything. We argue like brothers do. But it's feel-good competition. If you have a bad outing, the next day we'll come in there and get on them. And that's good because, first off, when people do that after you have a bad outing, it makes you relax a bit. Not everyone is looking at you, 'Oh, you blew the game.' It keeps a good atmosphere, and with Harkey, his main thing is keeping us loose in there and that goes a long way in keeping us focused."

Ottavino also believes the relaxed dynamic they have created in the bullpen is also a product of a group of mostly veteran guys who truly understand their roles within the team.

"I think just because we're not in a situation where there's much competition amongst us for like roles and stuff like that, and we were brought in for the right reason, which is winning," Ottavino said. "So I don't think we had any of those issues from the jump like a lot of teams do. We definitely root for everybody to do good."

"I think that's what probably scares a lot of players and a lot of people from working for this organization, that the expectations are so high," Harkey said. "When the expectations are high you have to find a way to be able to deal, and usually the best way to deal is to make light of them and go with the flow and remember that the game doesn't change, whether you play for a small-market team or for the New York Yankees."

KEEP UP WITH YOUR TRASH TALK

During the football season almost every member of the bullpen, except Chapman, runs a fantasy football team. That's where the relievers let loose with their trash talk, and the bulk of it is directed toward Kahnle and his two favorite football teams: the Philadelphia Eagles and Notre Dame's Fighting Irish.

"Everybody's always got something to say to Tommy," Green said. "He always leads the conversation. He knows all the stats; he knows everything. The first three innings are kind of quiet, but then Kahnle gets there in the fourth ..."

"No one is immune to the trash talk; no one is immune," Britton added. "But Kahnle, he loves to criticize everyone's team. Then as soon as you criticize his team he gets all defensive. He's so sensitive when it comes to the fantasy football stuff."

"I hope both [the Eagles and the Fighting Irish] lose every time they're playing. But if they're playing while we're playing, I actually root for them to win because I don't want to see Kahnle melt down," joked Ottavino.

"I am just the one that is easy to pick on," Kahnle explained. "I do have the more energetic personality, so it's easy to target me!"

SO WHAT'S UP WITH KAHNLE?

Once Kahnle arrives in the fourth ...

"It gets animated," Green said. "The first three innings sometimes there's not a word said. We just sit back and relax. Majority of the time the first three innings we're watching the game and just kind of hanging out. Then three or four guys come down, and they always got something to say, especially Kahnle."

"It's just random screams," Harkey said of Kahnle. "We leave the Eagles at the door, which is probably the best thing. He's just such an easy target. Notre Dame football, North Carolina basketball, Orlando Magic basketball, the Philadelphia Eagles. ... He is the most diverse sports fanatic I have ever seen, and I never met a person who takes it that seriously! ... Well, I have ... in the stands when they're screaming at us!"

When Britton was the closer for the Baltimore Orioles, he started removing the label on the water bottle he took to the bullpen, in order to identify it. Former teammate Darren O'Day started telling the staff in the bullpen that Britton hated to have the label on his water, it became a running joke and Britton has kept it up as part of his routine.

"I try to be the same way, being superstitious about not being superstitious," Ottavino said. "But this year I've been leaning more into superstition with the color of my Gatorade. I like them all. So if I pitch and I am drinking the purple one for a while, and it's working, I'll keep going. And then if I give up a run I switch to red. But no one is really that superstitious."

"No one is really superstitious," Green said. "If we give up a few runs we're not changing seats or banning certain items or stuff like that. But Britt never wants the wrap around his water. He just doesn't like the label."

And of course, Britton had to get one more dig on Kahnle.

"He says he's not superstitious, but Tommy Kahnle has a weird one where he throws water all over his face when he is on the mound. We're like, what the heck is that? Every time he does that, as usual, we're just like what is he doing?" he said.

"No man is an island, except Aroldis Chapman." -- Anonymous

Chapman has no interest in football, so he doesn't partake in the fantasy discussions. But that doesn't mean that he doesn't enjoy interacting with the rest of the guys ... from afar.

"I don't talk much, unless they talk to me. I'm in my corner, always focused, watching the game. But I do like to listen to what they say, and it cracks me up," Chapman said. "And it's mostly Kahnle, all the time, with football and fantasy. He's like a madman. I love it."

"Chappy's got too much stuff going on. Shopping. Fashion. We'll never get Chappy into fantasy football," Harkey said. "But you know, he's got the language barrier, but he understands almost everything we talk about."

"With Chappy, he doesn't have anything to worry about because he's got it all," Ottavino said. 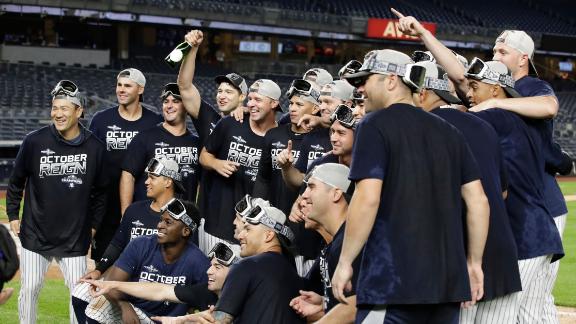 Resilience the calling card of the 2019 Yankees
The Yankees battled through injuries all season and bring that next-man-up mentality for a run at the World Series.
Report a correction or typo
Related topics:
sportsespnadam ottavinotommy kahnlemlbzack brittonaroldis chapmannew york yankeesja happcc sabathia
Copyright © 2022 ESPN Internet Ventures. All rights reserved.
TOP STORIES
3 men killed in violent night across NYC
UK Prime Minister Boris Johnson resigns
NYC to administer 6,000 monkeypox vaccine doses at pop-up clinics
7 On Your Side hunts for driver after ice cream truck hit and run
AccuWeather: Not as warm
Ex-cop to be sentenced on federal charges in George Floyd murder
NY nurse who got 1st COVID shot in US to be awarded Medal of Freedom
Show More
Mayor Adams holds 1st community conversation on public safety in NYC
Man slashed, nearly killed after inadvertent bump in subway station
Woman pinned under bus, rescued after being struck in crosswalk
Woman shot in chest while walking down street in Queens
Hundreds arrested in NYC during outstanding warrants crackdown
More TOP STORIES News