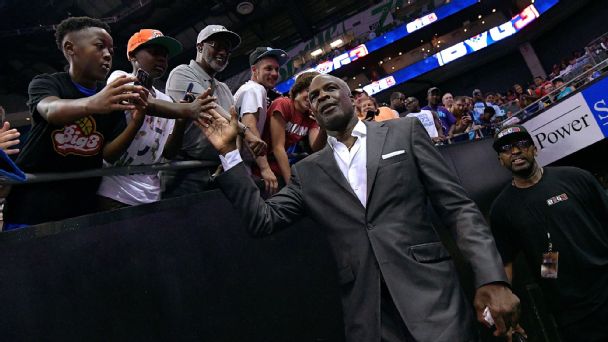 New York Knicks great Charles Oakley stood in handcuffs in the bowels of Madison Square Garden, surrounded by more than a dozen security guards and police officers. He'd been dragged out of his seat by arena security minutes earlier.

And he was furious.

A year later, Oakley's anger over how things played out during his arrest at Madison Square Garden remains acute.

"He's angry about what happened to him and the way he was treated," Oakley's attorney, Douglas Wigdor, said. "He was treated like a common criminal rather than a former star of the New York Knicks. ... He wants to hold Mr. Dolan and Madison Square Garden accountable for what they did."

Oakley is still looking for his day in court against Dolan and Madison Square Garden. His civil suit against both parties hasn't yet been presented to a jury and Oakley's lawyers plan to file an amended complaint this week. Attorneys for Dolan and MSG will likely file a motion to dismiss the suit at some point in the coming weeks.

"This suit has no merit," a spokesperson for Dolan said.

U.S. District Judge Richard J. Sullivan at some point will decide whether all or part the suit should be heard in front of a jury. At a pre-motion conference last month, Sullivan said Oakley faced an "uphill climb" to prove the defamation claims in his suit.

Wigdor remains confident he can prove Dolan and Madison Square Garden made defamatory statements in the days following Oakley's run-in with security. The Knicks' public relations account released a statement on the night of the incident that said Oakley, who played for the Knicks from 1988 to 1998 and helped the franchise reach the 1994 NBA Finals, was "abusive" and added "we hope he gets some help soon." In an interview on ESPN Radio two days after the incident, Dolan said, "To me, Charles has got a problem. We've said it before; he's his own worst problem. People have to understand that. He has a problem with anger. He's both physically and verbally abusive. He may have a problem with alcohol." This is one of subjects Oakley's legal team plans to attack in court.

"There's no basis to make that conclusion," Wigdor said. "I don't believe that he had a good-faith basis to make those remarks. He was looking to impugn Mr. Oakley's reputation."

Zipursky acknowledged the possibility of the suit being dismissed before a jury trial, but notes that there are some avenues worth pursuing.

"The law has developed in such a way that sometimes a public figure like Oakley could prevail by proving that they were spoken with recklessness as to whether they were true or false," Zipursky said. "If it's determined that Dolan and MSG leapt to that inference [that Oakley may have a drinking problem] and say it publicly, I think there's a decent argument that that is spoken with reckless indifference as to whether he is an alcoholic."

Zipursky also notes that because Oakley's suit includes "defamation per se," the ex-Knicks great may not need to show that the claims made by MSG and Dolan caused him economic harm. That may turn out to be an important factor, but Wigdor said that his legal team plans to show that Oakley indeed suffered economic harm in its amended complaint.

In addition to defamation, libel and slander causes of action, Oakley's suit also claims assault, battery and false imprisonment. It additionally states that defendants violated the Americans with Disabilities Act and the New York State and New York City Human Rights Laws by denying Oakley access to Madison Square Garden based on their perception that he suffers from alcoholism.

Zipursky believes the battery, assault and false imprisonment claims will be difficult to prove because the police and public prosecutor sought criminal charges against Oakley in the aftermath of the incident. (Those charges were dismissed last week.)

"I don't think it's likely that the security at MSG is going to be found to have had no reasonable basis for what they did," he says.

Another crucial element to the case, as far as Oakley's lawyers are concerned, is the visual evidence. There are several different videos taken by fans that show the incident in its entirety.

Those videos will likely be shown to jurors if the case is allowed to proceed. Sullivan will decide in the coming weeks which claims in Oakley's suit -- if any at all -- will eventually be decided by a jury.

In the meantime, Oakley will remain patient and dogged in his pursuit of Dolan and Madison Square Garden.