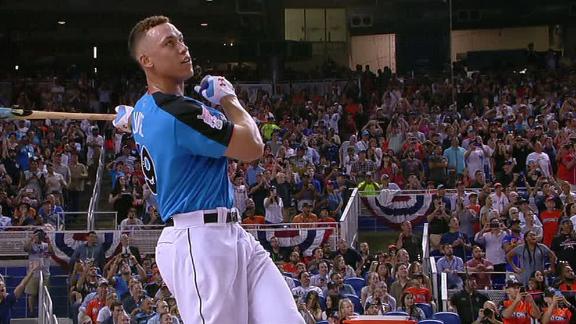 MIAMI -- It's not true that New York Yankees slugger Aaron Judge has a pet ox named Babe. It might be true, however, that he has the strength of a thousand men.

In the year of the home run, the rookie who has hit the most homers and the season's longest captured the Home Run Derby in impressive fashion, delivering in a pressure-packed first round and then toppling Minnesota'sMiguel Sano in the championship.

With the hometown fans rooting on Miami Marlins sluggers Giancarlo Stanton and Justin Bour, Judge played the role of the heel. The fans good-naturedly booed him in the introductions and then watched Judge take out Bour in a first-round battle for the ages -- 23 home runs to 22, the fourth- and fifth-highest totals in Home Run Derby history.

"It was a blast. I enjoyed every minute of it -- watching the other guys swing, coming here early and talking to the media," said Judge, who became the first rookie to win the Home Run Derby outright. "Everything about today was fantastic."

Bour had driven the crowd into a frenzy with his 22-homer round, including a timeout to eat a doughnut stuffed in his mouth by Stanton followed by a dramatic stretch of seven home runs in seven swings. Judge went next and required extra time to hit the two home runs needed to beat out Bour.

With Yankees catcher Gary Sanchez upsetting Stanton in the first round, 17 home runs to 16, the fans didn't get the dream matchup of Stanton vs. Judge.

"It just didn't work out as we had planned," said Pat Shine, Stanton's pitcher.

The crowd also seemed exhausted after a dramatic first round in which all eight players reached double digits in home runs, with four matchups decided by one homer.

The final two rounds were a little anticlimactic. Judge took out fellow rookie Cody Bellinger of the Los Angeles Dodgers in the semifinals with a round that included three 500-foot home runs, including back-to-back shots of 504 and 513 feet -- the longest of the night. Judge then faced Sano in the final, a meeting of the two players with the highest average exit velocity in the regular season.

Sano went first and hit 10 home runs. Judge then blasted 11 home runs in 15 swings, clinching the title with an upper-deck shot to center field. He still had 1:53 left on the clock.

"That guy Aaron Judge, he doesn't get tired," Sano said.

Judge joined Ken Griffey Jr. (1994) and Mark McGwire (1992) as the only players who led the majors in homers at the break and also won the Home Run Derby. Judge accomplished that feat by hitting the second-most homers ever in a derby, launching 47 compared to Stanton's record of 61 last year in San Diego.

Despite all the hype about his participation in this year's Home Run Derby, Judge said he came into Monday night's exhibition feeling free and easy.

"I had no pressure going into it," Judge said. "I'm a rookie. This is my first time doing it. For me, I got no expectations. I'm just going to go in there and have some fun."

Calling the event "an incredible experience," Judge is believed to be the first player to hit the closed roof at Marlins Park; however, it didn't count as a homer.

"I got it in BP, too, earlier," Judge later explained. "So I wasn't too surprised by that."

It is, indeed, the year of the Judge.