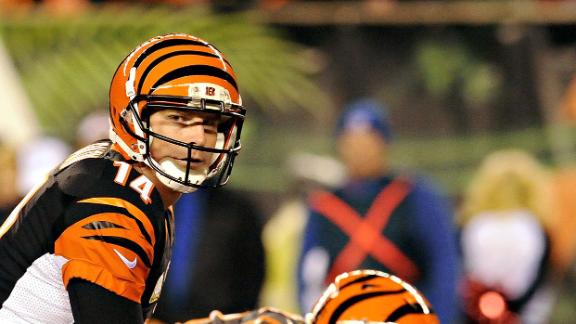 CINCINNATI -- Andy Dalton is headed to the Pro Bowl.

An injury to Aaron Rodgers allowed the Cincinnati Bengals quarterback to be named to this year's Pro Bowl teams as an alternate, the Bengals announced Tuesday. It will be the second time in his career Dalton has been named to a Pro Bowl team.

He will be one of four Bengals in Arizona for the all-star game on Sunday, joining defensive tackle Geno Atkins, receiver A.J. Green and punter Kevin Huber. Green and Huber were voted into the Pro Bowl last month. Atkins made the cut on Friday as an alternate, earning the spot vacated by Detroit's Ndamukong Suh, who had to bow out because of injury.

Rodgers has been hampered by a calf injury the past few weeks and is coming off Sunday's 28-22 overtime loss of the NFC Championship Game.

Dalton made the team after being voted a seventh alternate during the Pro Bowl voting last month.Baltimore Ravens quarterback Joe Flaccoturned down his first Pro Bowl invitation because his wife, Dana, is due to deliver their third child Tuesday.

Once again "unconferenced," this year's Pro Bowl teams will be determined from the list of players who made it to the game. That list gets separated into two teams at 8 p.m. Wednesday when team captains, Hall of Famers Michael Irvin and Cris Carter, make their selections during a show on NFL Network.

Dalton has led the Bengals to the playoffs in each of his first four seasons, but he hasn't won a playoff game. He threw for 3,398 yards in 2014 while also amassing 19 touchdowns and 17 interceptions. He also had a career-best completion percentage (64.1 percent) this past season.

Tom Brady can't play because the New England Patriots are in the Super Bowl, and Rodgers, Peyton Manning and Ben Roethlisberger pulled out of the game because of injuries. The other top two alternates also are unable to play because Philip Rivers is injured and Russell Wilson is playing in the Super Bowl.

That means Dalton and three other alternates (Drew Brees, Matthew Stafford and Matt Ryan) were added to the Pro Bowl.