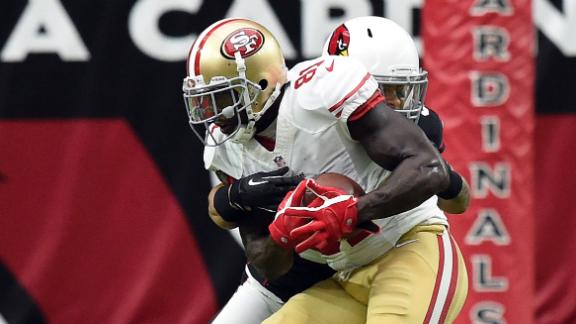 Wide receiver Anquan Boldin went off on the officiating Sunday, blaming the referees' disparity in calls the last two weeks for playing a large part in the San Francisco 49ers losing both games.

"Every week, it's the same thing -- send the tape in, the NFL just reports back, 'We made a mistake.' But at the same time, the crap cost us another game. At some point, they need to be held accountable."

Boldin called the disparity and timing of the calls "unbelievable," adding, "If you're going to call it, call it both ways."

Asked if great teams should be able to play through such things, Boldin, who owned his unnecessary roughness penalty for head-butting Tony Jefferson, shrugged.

"You try to," he said, "but at crucial points in the game like that, how can you?"

Two particularly galling penalties from the Niners' perspective: On consecutive plays in the third quarter with the 49ers clinging to a 14-13 lead, linebacker Dan Skuta was flagged for unnecessary roughness on his tackle near the head of a sliding Drew Stanton on a second-and-6 play then Patrick Willis drew a roughing-the-passer penalty on Stanton.

The 30 yards in penalties helped the Cardinals on their 66-yard, five-play TD drive that gave them a 20-14 lead with 4:39 to go in the third quarter.

"We've got to do a better job -- as coaches and players," 49ers coach Jim Harbaugh said, "of not getting those penalties."

The 49ers, who have advanced to the NFC Championship Game in each of the past three seasons, are off to a 1-2 start.