As wild-card race heats up, you gotta believe ... in Pete Alonso 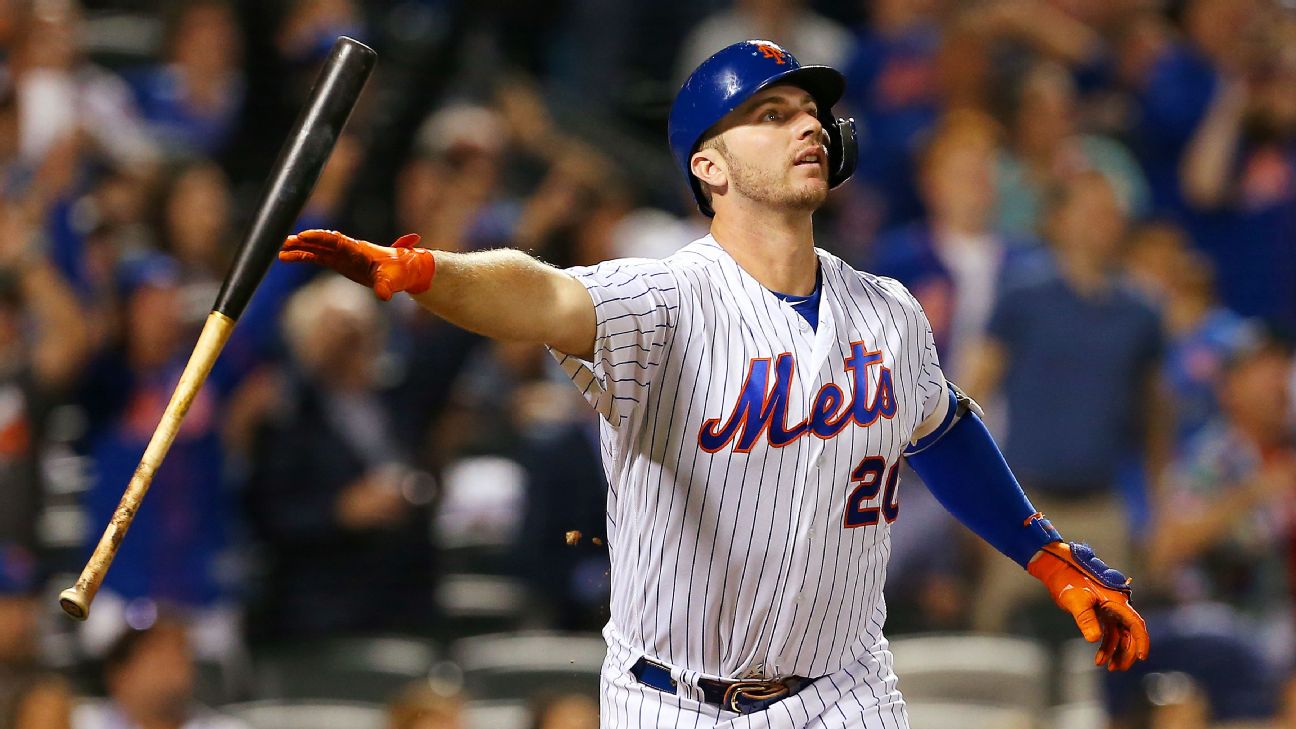 In his rookie season for the record books, Pete Alonsois tied with the Reds'Eugenio Suarezfor the major league lead with 47 home runs, shattering the New York Mets' team record of 41, and he has a chance to break Aaron Judge's rookie mark of 52. He ranks in the top 10 in the majors in RBIs and second with nine home runs in "late and close" situations, has the third hardest-hit ball of the season at 118.3 mph, has hit better against winning teams (.987 OPS) than losing teams (.871 OPS) and has even survived getting hit by 20 pitches.

In a Mets season typically full of injuries and various soap opera subplots, Alonso has been the constant: He's been mashing all year long.

Those are just the numbers. Alonso's impact for the Mets goes beyond the home runs hit and the runs driven in. Mets broadcaster Ron Darling put it perfectly the other day in describing how Alonso has become the face of the franchise: "Some people come to New York and play for the New York baseball team, and some become New Yorkers."

Alonso has not only successfully navigated major league pitching, but he's successfully navigated New York like few players before him. That's not an easy task. I don't always completely buy into the "It's tougher to play in New York (or Boston) than other cities," but there's something to the mantra. There's more media and a portion of that media can be unrelentingly critical even when things are going right. The fans are passionate, but also quick to turn on you when things go wrong.

Like Mike Piazza, however, Alonso simply has that "it" factor, that larger-than-life personality. He has embraced New York and Mets fans have embraced him. Yes, 47 home runs goes a long way to winning over the fans, but what's not to love?

The other day, to honor the 9/11 anniversary, Alonso had petitioned MLB to let the Mets wear first responder caps during the game, like they had back in 2001 in the immediate aftermath of the tragedy. When MLB denied the request, Alonso wore special first responder cleats -- and then gave the entire team a pair:

"This is a gift from me to show my appreciation for you guys, because for me this is an awesome year, an awesome experience, and these guys have been really awesome, so it's a gift," Alonso said. "They can keep them, they can donate them. They're really cool shoes."

The next day, mired in a mini-slump, he shaved his new mustache in the middle of the game:

Then there was the celebration on Sept. 6, when Alonso drew a bases-loaded walk-off walk to give the Mets a 5-4 victory over the Phillies. Mets teammates responded by ripping off his jersey, which didn't prevent Alonso from doing a shirtless postgame interview:

And that's just September. Back in July, he ensured a lifetime bond with Mets fans with this tweet, dropping an extra character in the "LGM" -- Let's Go Mets! -- slogan:

Alonso is a guy who loves the spotlight, loves the roar of the crowd and appreciates his good fortune. He won the Home Run Derby at the All-Star Game, winning a $1 million bonus that is nearly double his 2019 rookie salary of $550,000, and wasn't shy in expressing his emotion in victory. "Oh my god, that was a blast. I'm going to remember that the rest of my life," he said. "This means so much." He then donated 5% of his winnings to the Wounded Warrior Project -- both of his grandfathers served in the military -- and 5% to Tunnel for Towers, a foundation that benefits first responders.

Above all, he loves the game -- as he so often expresses on the field, a love that looks and feels pure. His enthusiasm is authentic.

"I just love hitting," he told me back in April, when he won a permanent spot in the Mets' lineup by hitting nine home runs. "It's something I've worked on a lot, but also it's something I really, really enjoy. I mean, it's my favorite hobby. It's a job now, but for me, I love it."

What has made him so good? Above all, of course, there is the raw strength that has earned him the "Polar Bear" nickname. Look at this swing from earlier in the season against the Marlins:

Not exactly your picture-perfect point of balance upon contact, right? That ball went 418 feet over the center-field fence.

Maybe the most impressive thing about Alonso's season: He has seen the lowest percentages of pitches in the strike zone of any hitter in the majors, just ahead of Josh Bell and Christian Yelich. He quickly earned the respect of his opponents. A few other notes on his impressive offensive season:

Back in May, he had a terrible strikeout-to-walk ratio of 31-to-4. It appeared pitchers had found some potential holes in his game. He made some adjustments, toned down the aggressiveness, and has 95 strikeouts and 49 walks since then, a 2-to-1 ratio instead of 8-to-1.

He obviously has some swing-and-miss in his game -- who doesn't these days -- but his overall strikeout rate of 25.6% isn't much higher than the MLB average of 22.8%.

He loves the center of the diamond. His 19 home runs to center field leads the majors (Mike Trout is second with 17).

If there's one area of improvement for Alonso, it's cutting down on his chase rate. At 31%, he's above the league average of 28.8%. As he sees a steady of diet of sliders and curveballs, he should learn to lay off some of those pitches and either see a higher walk rate or see more fastballs that he might pummel.

For now, it's about getting into one final hot streak these last two weeks. The Mets have a tough path to the wild card, but if anyone can carry them to the postseason, it's the big kid with the big heart and the big swing.
Report a correction or typo
Related topics:
sportsespnmlbnew york metspete alonso
Copyright © 2020 ESPN Internet Ventures. All rights reserved.
More Videos
From CNN Newsource affiliates
TOP STORIES