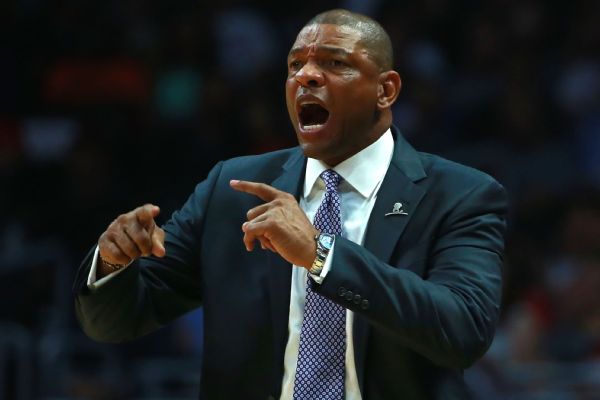 HOUSTON -- Los Angeles Clippers coach Doc Rivers and his son Austin were ejected in the first half of their game with the Houston Rockets on Friday night.

Austin Rivers was kicked out when, after missing a layup, he lightly pushed official J.T. Orr with 6 minutes, 38 seconds to play in the second quarter. Rivers yelled at Orr and waved his arms at him after the ejection and was led off the court by a Clippers employee. When he got to the edge of the court, he tried going back toward the referee and had to be held back by the employee and pulled off the court.

Then, during a timeout, Doc Rivers approached lead official Jason Phillips. Rivers said he was asking why Marreese Speights wasn't awarded any free throws when a whistle was called on a made basket following Austin Rivers' missed layup.

Phillips ejected Doc Rivers with 6:13 to play and the Rockets leading 59-35. Assistant Mike Woodson took over coaching duties for the Clippers, who went on to lose 140-116.

Doc Rivers said his son should have been ejected for touching an official and that his complaint was with the officials for missing the foul shot for Speights.

"They'll say he made contact, which he did, but it wasn't intentional, which is clear," Doc Rivers said. "You can't judge intent; that's why they will say there was contact, but there's nothing you can do about it. I felt bad for him, [but] that's not why I was thrown out. I was thrown out for a different reason."

Phillips addressed the ejections with a pool reporter.

"Austin drives to the basket, feels that he gets fouled on the play and then, after finishing the play, makes contact while using profanity ... makes contact with official Orr and is ejected immediately on one technical foul," Phillips said.

"During the timeout, Doc is complaining about the play that Austin gets ejected on, and during that compliant, he uses extreme profanity directed at the officials and so therefore he is ejected on one techicnal foul also."

Austin Rivers said after the game that he didn't notice Orr was behind him when he missed the layup.

Both Austin Rivers and Doc Rivers were ejected in a loss to the Washington Wizards on Dec. 18.

It's the third time this season Doc Rivers has been ejected and the fourth career ejection for Austin Rivers.

The Clippers played withoutBlake Griffin and Chris Paulon Friday night because of injuries.

Like father like son, both Rivers get tossed in Clippers' loss
After not getting a call going hard to the hoop, Austin Rivers makes contact with an official and gets tossed from the game. Soon after it's Doc Rivers' turn when he argues about Austin's ejection and gets tossed himself.
Related topics:
sportsespnaustin riversejectionla clippersdoc riversnba
Copyright © 2020 ESPN Internet Ventures. All rights reserved.
More Videos
From CNN Newsource affiliates
TOP STORIES