Ben McAdoo believes he still has control of Giants, despite suspensions 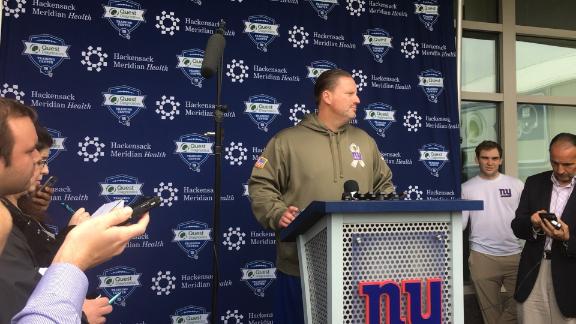 EAST RUTHERFORD, N.J. - Coach Ben McAdoo still believes he has control of the New York Giants locker room despite having three players miss Monday's practice following the bye week and having to suspend cornerback Janoris Jenkins for a violation of team rules.

Jenkins is the second veteran cornerback suspended in a three-week stretch.

The reality is the Giants (1-6) are one of the league's worst teams. They're also the only team that has been forced to suspend a pair of players - supposed veteran leaders, no less - in recent weeks. Cornerback Dominique Rodgers-Cromartie was banned following a Week 5 loss to the Los Angeles Chargers.

McAdoo admitted earlier this week that as the head coach everything falls on his shoulders. Jenkins not making it back on time for practice Monday and not even providing the team with a reason until the following day would certainly seem to qualify as well.

"I don't take it personal," McAdoo said. "You can't take things personally in this business. You have to take them on a case-by-case basis."

Still, it's two suspensions in three weeks for a team that sits in last in its division. It's not exactly a glowing review of this 2017 campaign for McAdoo or the Giants.

"That's not something that going into the season I'd ever thought I'd have to do," he said. "But the decision was made and it had to be done."

McAdoo viewed the suspensions as a coincidence. He considered them isolated incidents.

His players had his back on Wednesday afternoon.

"Guys are still coming to meetings on time. They're still understanding his message towards the team and what he's trying to do. I would say he still has the respect. When you see guys not wearing team stuff properly or not being where they are supposed to be then that is being disrespectful. That is when you lost the team. Guys are not doing that."

Three players were missing from Giants practice on Monday following their bye week. Running back Paul Perkins and cornerbacks Eli Apple and Jenkins didn't make it back on time.

Perkins and Apple communicated with the team. Jenkins did not. Jenkins earned a suspension for violation of team rules, while Apple and Perkins were also disciplined, likely in the form of a fine.

The Giants weren't happy with any of them missing Monday's workout.

The Giants players seemed to understand McAdoo's decision to suspend their Pro Bowl cornerback, even if it won't help the team when they face the Los Angeles Rams on Sunday at MetLife Stadium.

"Jackrabbit, love him to death, but he broke a team rule. He violated something and ever since I was young when you break a rule and get caught, there are consequences," defensive captain Jonathan Casillas said. "His consequence is a suspension. I don't like it. I want him here. But at the end of the day he did break a team rule. It's not like he didn't do anything or that he was late.

"It was kind of inexcusable. Whether I support Ben McAdoo or not he's the head coach. He's doing what he thinks is best for the team."

Casillas added that these kinds of things happened when he was in New England under Bill Belichick. Players were late. He didn't, however, say they were suspended, nevertheless twice in three weeks.

Both Rodgers-Cromartie and Casillas said they had been in contact with Jenkins. Neither defended his actions, and thought he could have handled the situation better.

It was his lack of communication with the Giants that really seemed to stand out. The Giants didn't hear from Jenkins until he returned on Tuesday.

But McAdoo originally called Jenkins' absence excused on Monday without ever having heard from him.

"Again, until I have all the facts, I need to protect the players," McAdoo said of not being honest about the situation.

When he received the facts, he suspended Jenkins indefinitely. It will cost the cornerback $758,824 per week.

McAdoo addressed the suspension with his team on Wednesday.

"At the end of the day, we're professionals," he said. "We have to act like it."