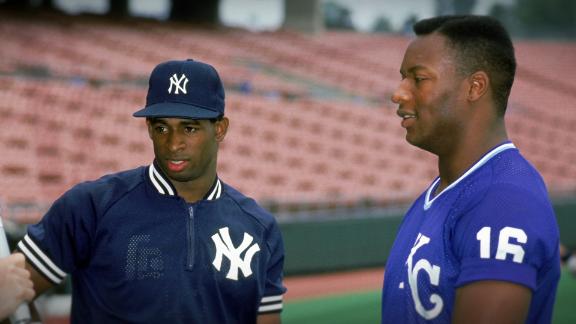 We will have some baseball to watch very soon, but in the meantime, let's take a look back at a memorable night at Yankee Stadium exactly 30 years ago, on July 17, 1990.

The Kansas City Royals defeated the New York Yankeesby a score of 10-7, but the game is noteworthy because it featured both Bo Jackson and Deion Sanders -- a pair of multisport legends.


Not only that, but Jackson and Sanders combined for four home runs. Jackson slugged three for the Royals, while Sanders hit an inside-the-park job for the Yanks.

That might be just another stat for these two. If you're keeping score, that's four home for two guys to tack onto career achievements that include:

Unfortunately, Jackson did not get a chance to hit a fourth homer -- he injured his shoulder diving for the ball that Sanders hit and eventually rounded the bases on.

It was a bright spot in a brutal season for both teams. The Royals finished second to last in the American League West at 75-86, while the Yankees finished last in the AL East at 67-95.