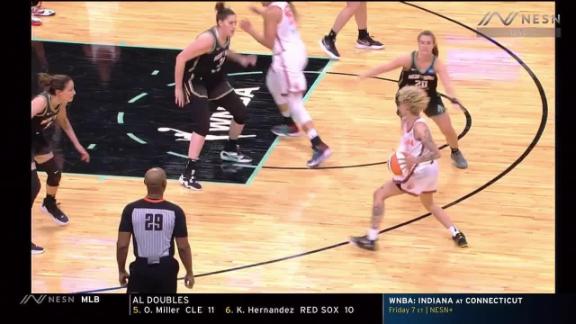 NEW YORK -- - DeWanna Bonner made her season debut for Connecticut and scored 12 of her 16 points in the decisive first half and the Sun beat the New York Liberty 92-65 on Tuesday night.

Natasha Heideman had a season-high 15 points, Brionna Jones scored 14, Jonquel Jones 13 and Alyssa Thomas had 12 points and four steals. Courtney Williams, who also sat out the first two games (suspension), had four points on 1-of-4 shooting with 18 minutes.


The Sun (2-1) missed their first six shots and committed two turnovers as New York scored 10 of the game's first 12 points before Michaela Onyenwere hit a 3-pointer to give the Liberty a 15-11 lead with 2:48 left in the first quarter. Brionna Jones answered with a layup and Heideman followed with a 3 to spark an 18-0 run over the next nearly-4 minutes to take the lead for good.

The Liberty, who have lost four in a row since beating Connecticut 81-79 in the season opener, committed 29 turnovers. New York set its franchise's single-game record for turnovers with 30 against the Phoenix Mercury in 1998 and had 29 turnovers against the Los Angeles Sparks last June.


The Utah Starzz set the WNBA record with 33 turnovers against the Phoenix Mercury on August 17, 1997.