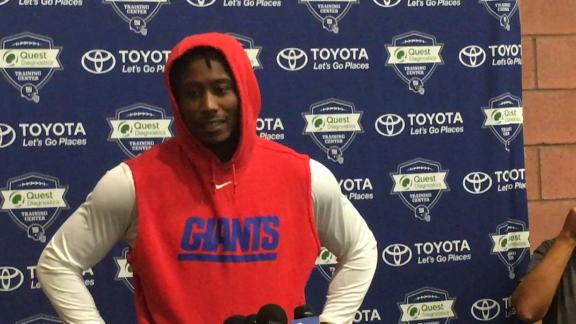 Marshall again took the high road Tuesday when asked about Richardson's most recent comments. Richardson said that Marshall "knows what he did to the locker room" and called his actions "drama queen-ish" during an interview last week on The Michael Kay Show on ESPN New York 98.7.

The former teammates have their differences. They became public during a 5-11 season when they nearly came to blows in the locker room following a Week 3 loss to the Kansas City Chiefs.

"I wasn't surprised," Marshall said of Richardson's latest round of comments. "But, you know, there is so much good energy here and the environment is amazing. I don't really have time ... I don't have time to go back to that.

Marshall, 33, took a similar stance when he was asked about other Richardson comments in the spring. Marshall insists he's busy trying to fit in with a new team and learn a new offense. He made a leaping one-handed grab in the end zone during practice Tuesday.

Richardson made headlines in the spring when he said there are "15 reasons" why the locker room is a better place this season -- an obvious reference to Marshall, who wears No. 15. "I'm not a perfect guy, but I worked extremely hard to get in the position that I am in today," Marshall said in the spring. "The first couple of years of my career, it was rough. And a lot of it I did myself. I hurt myself. But since that point, once I figured things out, I've worked extremely hard to be a better person.

"I've worked extremely hard to be a better teammate, a better father, a better husband -- and I'm proud of where I'm at today. I wake up every single day, trying to make a positive impact in any room that I step into."

The early reviews in East Rutherford have been positive. Coach Ben McAdoo called Marshall a "breath of fresh air" in the spring and added he was a "tremendous communicator" just last week.

Marshall signed a two-year, $11 million deal with the Giants after being released this offseason. It came after requesting his release in March. He later said in a radio interview he didn't want to stay with the Jets because he felt they had no chance to win in 2017.

Much like last season, that didn't go over well with Richardson and reignited the situation, even if Marshall continues to try to put it in the past.