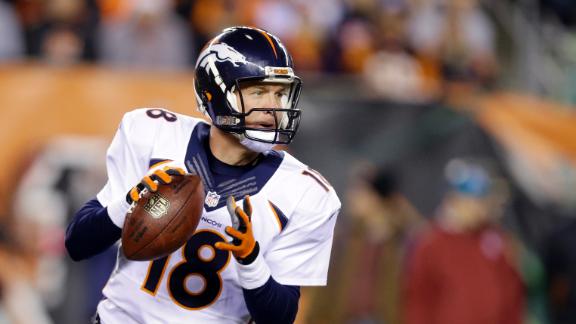 "Oh man, that's what happens when you win games," Harris said. "And we're able to win a lot of games and have a lot of impactful players. I mean, it's just awesome. It's just a great honor to be in that nine."

Harris, who recently signed a five-year, $42.5 million contract extension, is the sixth undrafted cornerback to make a Pro Bowl with his original team and the first since Dallas' Everson Walls in 1981.

Manning extended his QB record with his 14th selection, tying center Bruce Matthews and tight end Tony Gonzalez for the most in NFL history. The five-time NFL MVP has thrown for 4,454 yards with 39 touchdowns and 15 interceptions this season.

The NFC East champion Dallas Cowboys were second with six selections -- all on offense -- for the Jan. 25 game in Glendale, Arizona, site of the Super Bowl.

Among the players earning first selections are wide receivers T.Y. Hilton of the Colts and Jordy Nelson of the Packers; Steelers running back Le'Veon Bell; and Eagles special-teams star Darren Sproles.

"I think this year the difference has just been the amount of opportunities," Nelson said. "There have been more opportunities forRandall [Cobb]and myself, and we have just been trying to make the most of them. I think for the most part wehave been successful and just tried to help the offense put up as many yards and points as possible."

Martin, Aaron Donald of St. Louis and C.J. Mosley of Baltimore were the rookies selected.

Arian Foster was one of two Houston Texans honored, along with defensive end J.J. Watt.

Panthers tight end Greg Olsen was pleased with his selection.

"It's a tremendous honor to be selected to the Pro Bowl, and be recognized by your peers, the coaches and the fans," Olsen said. "It's something that every player thinks about at one point in time. I'm very thankful and feel very fortunate to be a part of it."

The Super Bowl champion Seattle Seahawks were one of six teams with five players. Not enough, according to one of their stars.

"It's kind of frustrating because you sometimes feel like your teammates are getting punished for being on a good team," defensive back Richard Sherman said.

In fact, no members of the Giants were selected. Three other teams -- the Vikings, Titans and Jaguars -- also were shut out.

For the second consecutive season, players will be selected without regard to conference in voting by fans, coaches and players.

Hall of Famers Cris Carter and Michael Irvin will serve as alumni team captains for their Pro Bowl teams.

The Pro Bowl will be held before the Super Bowl for the sixth consecutive year.