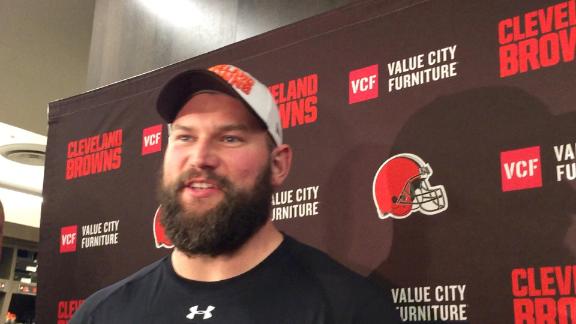 BEREA, Ohio -- A 3-point shooting contest. Perhaps a long-drive competition. Or maybe even bowling on the beach.

Those are just some of the ideas that the guy who knows the Pro Bowl better than anyone suggested as a way to enliven the NFL's postseason get-together of stars.

"I said people would tune in and watch it," Browns left tackle Joe Thomas said Wednesday.

Thomas made those suggestions -- and more -- during conference calls with NFL officials the past couple of years as the league tried to come up with ways to make what has become a half-speed exhibition more interesting.

"Not to take any credit, but I'm taking credit here," Thomas said. "That was one of my suggestions to spice up the Pro Bowl a little bit, was to do skills challenges that aren't specific to your position. I thought it would be really funny to make fat O-linemen try to throw a football or catch a football. Or make quarterbacks have a long drive contest or make them lift weights.

"Do stuff that's maybe out of their comfort zone. I said people would tune in and watch it."

In days long past that kind of competition existed. It was called "Superstars" and was broadcast on ABC and NBC in the 1970s and '80s. Thomas thought something similar would work at the Pro Bowl.

The league bought in and settled on dodgeball, a relay race and precisions passing -- among others. The announcement came Dec. 13.

"I think people are going to watch (dodgeball)," Thomas said. "They're gonna be interested to see what's going on."

"I want to see the big linemen dive out of the way of the ball, or try to catch it to bring one of his teammates back in," Golic said.

Thomas knows any competition has to be something where players will not get hurt, which is why he liked the idea of linemen throwing passes.

"If I'm throwing the football, I'm not going to hurt anybody," he said.

The low risk of injury also factored into his idea about a 3-point shooting contest.

"Everybody in an NFL locker room, they love basketball," Thomas said. "They all grew up playing basketball. They would die to have a 3-point competition, and a home run derby. I think that would be so fun. Long drive. Home run derby. Three-point contest."

One other thing Thomas would have changed: Return the Pro Bowl to Hawaii. The league has decided to move the game around; this year it will be in Orlando, Florida.

"I think if you polled 100 NFL players that were at the Pro Bowl, all 100 would say that they wish it was in Hawaii," he said.