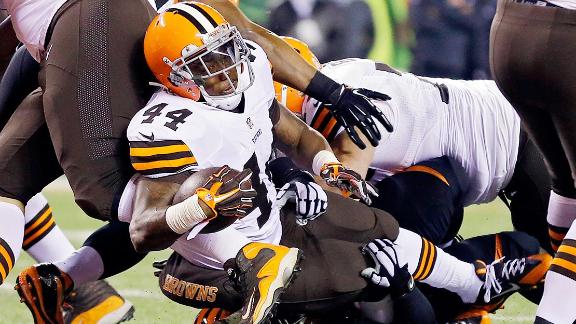 The Cleveland Browns have waived running back Ben Tate, the team announced Tuesday.

Tate had just two carries for minus-9 yards in last weekend's loss after complaining earlier in the week about the number of carries he was getting in the Browns' three-running back rotation with Terrance West and Isaiah Crowell.

But a team source told ESPN's Bob Holtzman that the move was primarily a football decision. The Browns are pleased with how West and Crowell, both rookies, are playing and want special-teams production from their third running back, which Tate didn't provide.

The Indianapolis Colts have begun researching Tate -- including his character and potential fit in Indy's scheme -- and appear interested in possibly claiming him off waivers, according to a source. Indy needs running back help after placing Ahmad Bradshaw on injured reserve.

Tate agreed to a two-year contract worth up to $7 million in the offseason after serving as Arian Foster's primary backup with the Houston Texans the four previous seasons.

He had six carries for 41 yards in his Cleveland debut, which was soured by a knee injury that forced him to miss nearly a month of action. He ended up playing eight games with 106 carries for 333 yards and four TDs.

"With all the transactions we make while constructing our roster, it will always be our intent to do what is best for our football team," Browns general manager Ray Farmer said in a statement. "This move is no different and we wish Ben the best going forward."

There seemed to be a growing rift between the Browns and Tate, who said last week he'd "be lying" if he said he was happy with the team's three-headed running back approach.

When asked Monday about Tate's attitude, coach Mike Pettine said there's nothing he'd like to share publicly but added Crowell and West -- who have combined for 72 carries the last three weeks -- have "a little more pop" as explosive options for the Browns. Those players likely will have a weekly audition for the starting job in the coming weeks.

Since rushing for 202 combined yards in Weeks 5 and 6, Tate averaged 1.7 yards per carry in his last five games, going for 90 yards on 53 attempts.

Tate argued that his skill set hadn't changed, and the running game was an 11-man effort. He told ESPN on Sunday that he wasn't hurt and wasn't aware of any doghouse issues for him.

Tate was used primarily as a third-down back in Sunday's loss to Houston.

The Browns can promote Glenn Winston from the No. 4 tailback to No. 3.

But next week the Browns also need to clear a roster spot for Josh Gordon as the decorated receiver returns from suspension. The Tate move satisfies that if the Browns choose not to make another move.

Tate, meanwhile, is now subject to the NFL's waiver system.