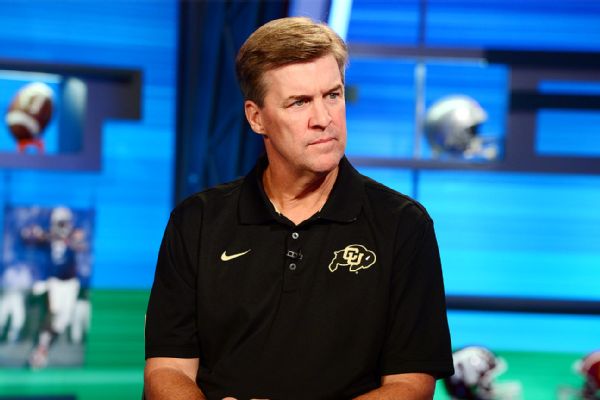 Colorado coach Mike MacIntyre said Friday that he followed protocol after the ex-girlfriend of former assistant Joe Tumpkin told him that Tumpkin had physically abused her.

In a prepared statement, MacIntyre said that after repeatedly checking that Tumpkin's ex-girlfriend was in a safe place, he told the woman in a separate conversation that he was obligated to report her claims to athletic director Rick George. Tumpkin's ex-girlfriend told Sports Illustrated that she called MacIntyre on Dec. 9 and recounted the abuse she had received from Tumpkin since February 2015.

"I was clear in communicating to her my obligation as a university employee to notify my superior, which is exactly what I did," MacIntyre said in the statement released Friday. "I can say I did everything necessary to ensure this individual's statements were relayed immediately."

Colorado announced Tumpkin's resignation on Jan. 27 and said the coach had been on administrative leave since Jan. 6, when MacIntyre and George learned of a temporary restraining order against him. The school released a statement Feb. 3 that Tumpkin had signed and received the temporary restraining order Dec. 30, but no athletic department officials learned of it until Jan. 6.

Tumpkin, the Buffaloes safeties coach the past two seasons, worked during December and served as Colorado's interim defensive coordinator for the Valero Alamo Bowl against Oklahoma State on Dec. 29.

MacIntyre said Tumpkin was elevated to defensive play-caller because no police reports or legal complaints had been filed at the time, adding that his "superiors" approved the decision.

His accuser told Sports Illustrated she was abused by Tumpkin approximately 80 times over a nearly two-year period, most recently in late November, when the woman visited Tumpkin the weekend Colorado played Washington State.

"I understand the concerns of those who worry about the safety of women -- as I do -- and those concerned that success on the football field means we will abandon our ethics and morals," MacIntyre said in the statement. "That is not who I am as a man, a coach, a teacher and as a member of the CU community. I did not come to CU to run a program or to achieve success at any cost. Nor has the CU leadership ever encouraged such behavior."