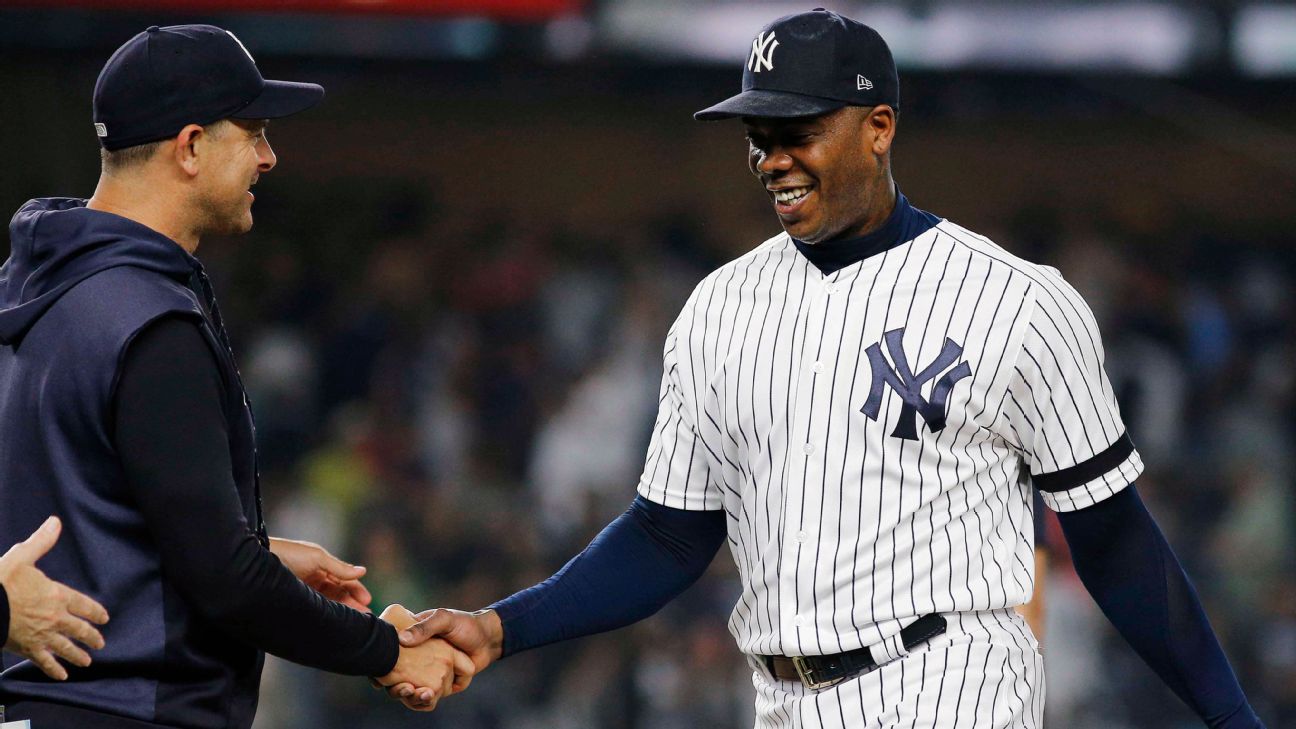 You've likely read this before, maybe even in the past 24 hours if you follow Major League Baseball closely: "The bullpen let a close game get away in a disastrous seventh [or eighth or ninth] inning ..."

That's because an exceptional group of relievers and the clever management of a bullpen can be instrumental over the course of a season. There are bullpens that merit adjectives like "lockdown," "flame-throwing," "championship-caliber" or, as Yankees star Aaron Judge put it: "just plain nasty."


A pedestrian group of relievers can undermine a playoff-worthy team's blueprint for reaching the postseason, while a few gifted arms can elevate a mediocre team to championship-caliber. Elite relief corps not only consist of relievers who pitch well but also those who reliably deliver in critical moments.

"There's no denying it's an advantage," Tampa Bay Rays manager Kevin Cash told ESPN about the benefits of having great arms in the bullpen. "We have a special group and a group that is willing to do kind of whatever is asked of them in whatever role. When you have flexibility like that, it puts all of us in a better situation to mix and match to get the most advantages possible throughout the season and in individual games in series."

"Our organization has been very good at acquiring new very talented skill sets as far as pitchers are concerned, but beyond that it's about the environment," added Rays pitching coach and former big leaguer Kyle Snyder. "There has to be an environment of selflessness. The biggest separator is trying to create that right culture, that right synergy among the pitching staff, that they care about who's right and left of them as much as they do themselves. They really believe that however it is that we're going to outfit our nine innings, it's going to serve us the best and give us the best chance to win."

The bullpens of the New York Yankees and the Rays have some of the best numbers, not just ERA but also their performances in back-to-back appearances. According to ESPN Stats & Info, in the past three seasons the Rays' relievers have held opponents to a .234 batting average, with a 3.76 ERA and a 1.22 WHIP. The Yankees' bullpen stats are eerily similar -- with 3.73 ERA, 1.27 WHIP and .231 opponents' average.

"[The Rays' relievers] are guys that can do a lot of different things. They bring in righties that throw hard, and they've got guys with good off-speed pitches and good game-plans," said Yankees reliever Chad Green. "That's one thing that we take away from their pitching staff, they always seem to know exactly what they're trying to do and each one of them has their own game plan. Their pitching staff goes in with a good game plan, especially against us, and it seems like they pitch well against us. They know what they're trying to do and they do it well."

Said Rays reliever Pete Fairbanks: "Our job is to go and get outs in every situation. And to be able to kind of put it aside and not think of it as, 'Oh, these are the last three is the game, I need to have this extra emphasis.' But to know that the outs are the outs. Our job is to go out there and get those outs and attack the strike zone."

In the past five seasons, the Rays and Yankees have been in the top five in terms of bullpen on-base percentage plus slugging percentage (OPS), with just Oakland (.669), the L.A. Dodgers (.671) and Houston (.674) having marginally better numbers. The Rays are fourth best with a .689 bullpen OPS allowed and Yankees follow in fifth place at .695.

In terms of strikeouts, the Rays have been the gold standard in baseball the past five seasons, recording an absurd number of 1,702 strikeouts. Afterwards come the Brewers with 1,591 K's, besting the Yankees by 1 (1,590) for the second-most strikeouts in baseball.


"You know when you play these guys, runs are going to be at a premium," Boone said of the Rays, who beat the Yankees in three out of the four games played in Florida on Aug. 7-9. "They're very good at run prevention. They do a really good job of that. They have a lot quality arms. They match up really well so they make it difficult."

"A lot is decided by what bullpen's going to be sharper that day," added reliever Zack Britton, who was the Yankees' de facto closer while Aroldis Chapman was on the COVID-19 list. "Just the quality of the arms that they're running out there you from top to bottom. A lot of different arm angles too, but just high-quality arms and very similar to our bullpen. It's a battle between which bullpen's going to be sharper."

The Yankees have seen the Rays as an annoying pebble in their cleats the past couple of years. The Rays, on the other hand, think of the Yankees as entitled and overrated. And a key element of the rivalry is their collections of arms that know how to hold bats at bay in the late innings.

While the Rays will never approach the Red Sox as the Yankees' historical rivals, a palpable intensity can be sensed when the two teams meet, from CC Sabathia yelling expletives and questioning the Rays' players' manhood, to manager Aaron Boone being ejected for arguing balls and strikes with the plate umpire while shouting that his players are "[expletive] savages."

The Rays finished the 2019 regular season with the second-lowest home attendance in the majors for a second year in a row. Nonetheless, ticket sales tend to rise significantly when the Rays host the Yankees, with more than half of the stands being frequently filled with fans in pinstripes gear. The Yankees' spring training home, George M. Steinbrenner Field, is located in the city of Tampa, which is also the site of New York's minor league development complex. That means there isn't a shortage of Yankees fans in the Tampa-St. Petersburg area, understandably much to the Rays' displeasure.

In the AL East, no other team has given the Yankees more trouble in recent years than the Rays. In 2019, the Yankees hit .303 and slugged .632 against Baltimore and even racked up a .290 average and slugged .501 against Boston, as well as .274 and .493 against Toronto. But against the Rays, those numbers drop dramatically -- a .234 average and .430 slugging percentage. Last year, the Yankees' offense scored an average of 5.9 runs per game against all opponents with an .843 OPS, but against the Rays the runs scored drop to 4.8 per game, and the OPS falls to .734. Just two other AL opponents held the Yankees to less last year (3.3 vs. Oakland; 4.4 vs. Cleveland).

The Yankees and Rays are two of the very few teams that have more than two pitchers who could be legitimate closers. Most teams have a couple of elite arms and then the level drops significantly to pitchers that can hold a tough offense at bay, but most of the time clubs are just hoping their second-rank relievers won't hurt them. But due to the complications in gearing up for this abbreviated season and starters not being properly stretched out, teams are deploying their relievers more regularly. That means that in this 60-game sprint to the playoffs, a reliable bullpen has been invaluable. And the mix-and-match game of bullpen chess between Cash and Boone has become must-watch TV.


According to the Elias Sports Bureau, this coronavirus-abridged 2020 season, starters are pitching an average of 4 innings per game. That's on pace to be the first season as far back as bullpen data has been collected (since 1974) where starters have averaged fewer than five innings per start, which is also more than an inning less than the average last year (6.0 IP).

While they reinstated Chapman from the IL, the Yankees suffered a significant loss to their bullpen this season when Tommy Kahnle, a late-inning right-hander, had to undergo Tommy John surgery.

"To get [Chapman] back at the back end [of the bullpen], I'm really excited about that. The trickle-down [effect] it has is to move other high-leverage guys and it makes us a little bit deeper back there," Boone said. "It's not just about Chapman and his greatness, but also where it slots other guys and gives you better options throughout the game."

"I like anybody that throws nasty. Anybody that's good, I like to watch. I don't care what team they play for," Fairbanks said. "If you go out there and you watch Chapman, he's a dude. He might play for the Yankees, but who cares? They're gross and I want to watch that so I can say, 'Well, I'm going to go put my stuff up there with them when I throw the ball well.' It's not necessarily a, oh, those guys are our competition... they're [just] kind of nasty."

The Rays' pitching roster, on the other hand, has been decimated by injury, losing seven pitchers this year, including Colin Poche (Tommy John surgery); Andrew Kittredge (sprained UCL); Oliver Drake (biceps inflammation); and most recently lefty reliever Jose Alvarado (shoulder inflammation). Nonetheless, Tampa Bay's bullpen is taking the Yankees' "next man up" mantra as its own.

"The flexibility that they've shown this year and definitely in years past, and allowing us to kind of insert them and what we feel would be their best role on a given night, that's allowed for not only them individually but the rest of the bullpen to really take shape and be a major strength," Cash added. "[Great bullpens] have stuff, most of the time it is power, so the margin of error is really limited when you're playing really good teams like that. But at the end of the day, when you look at New York's bullpen, they've got a big left-hander that hasn't come back yet, but when he does, they can match up or just say, here are our guys, we're going to stack them up, and it makes it very challenging for any offense."

Added Snyder, talking about watching his bullpen in action. "It's a privilege. To be able to watch them go out and on some level enjoy the fruits of our labor against arguably the best offense, matching up against arguably as good a bullpen as there is in the game, and really believing in what our players are capable of and knowing they're believing in themselves, is a lot of fun." 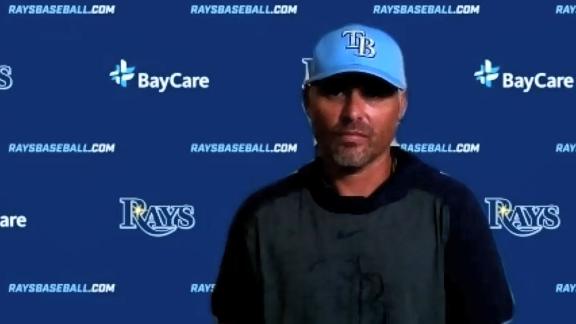