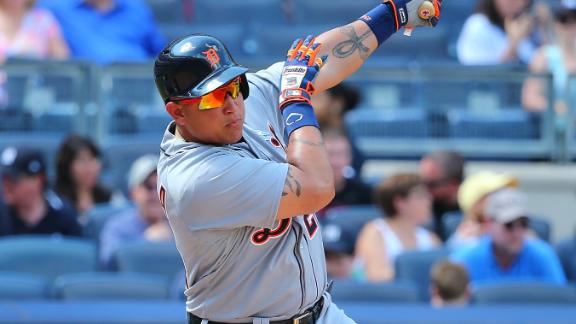 The game is July 14 in Cincinnati. Major League Baseball says the record for the most starters from one team is held by the 1939 New York Yankees with six, including Joe DiMaggio.

Cabrera, a nine-time All-Star, leads Hosmer by 1.38 million. A week ago, Hosmer led by 470,000.Cabrera's vote total of 9.3 million is second overall in the American League to Royals catcher Salvador Perez's 10.2 million.

"I even voted once for Miggy yesterday," Tigers manager Brad Ausmus said. "If he finishes one vote ahead of Hosmer, you guys better remember that."

Fans elected seven Reds to start the 1957 game in St. Louis. But concluding that half the fan ballots came from Cincinnati, commissioner Ford Frick added Willie Mays and Hank Aaron to the National League lineup in place of Reds outfielders Gus Bell and Wally Post.

Commissioner Rob Manfred said last week at Fenway Park that it was too early to draw conclusions.

"We'll see how it all turns out," he said. "We are responsive and open to change if we get a result that is not consistent with the goals of the system that is in place."

Voting runs through July 2, and starters are likely to be announced July 5.