Can Hammerin' Cameron Maybin stick in the Bronx? 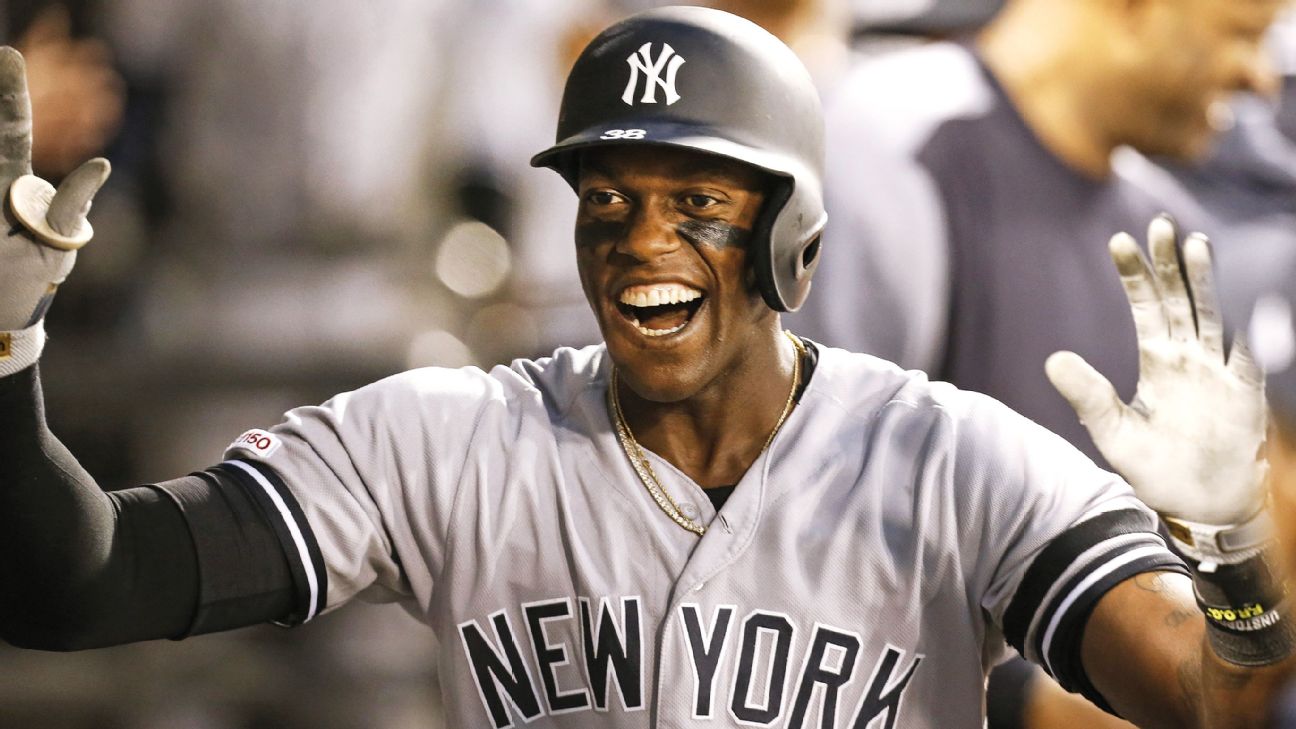 NEW YORK -- To those who witnessed the batting-practice rounds, it seemed as if every single pitch Cameron Maybinhit either ended up clanging off the deepest bleacher seats, or blasting into billboards and stadium signs well beyond the outfield wall, or ricocheting hard off the vine-covered batter's eye.

The New York Yankees outfielder was putting on a show on a rather random afternoon on the South Side of Chicago. Once it was over, observers were left gawking and muttering.

"Usually with batting practice, it is what it is," Yankees manager Aaron Boone said. "But we were all talking about it when we came in."

"He was hitting balls that we didn't know he could hit," center fielder Aaron Hicks said. "It was like he had fresh hands. 'Fresh hands' is a term where a dude hasn't played in a while, and he has raw power, raw everything. Hands are moving fast. He was putting some moves on some balls out there."

His hands might have looked fresh, but Maybin had been a regular in the Yankees' lineup in the days before last weekend's batting-practice explosion at Guaranteed Rate Field.

But with talk of his uncertain future in pinstripes starting to bubble to the surface, and with his exasperation at continuing to display warning-track power, Maybin finally decided that day to just let it go. He had his hands swinging freely, ripping hard at everything.

"I was trying to hit homers," Maybin said, smiling. "Just trying to see how far I could hit the ball without overswinging and overexerting myself.

Regardless of how easy he thought it was to hit them, the moonshots Maybin was raking served their deeper purpose. Since that day, he has been on a homer-hitting tear, launching four long balls in the past five games.

As the Yankees face one of Maybin's old teams in what will be one of their toughest series of the first half beginning Thursday, they'll be riding the scorching-hot hitter.

But for how long? With a roster crunch looming as one of the Yankees' biggest banged-up stars -- Aaron Judge -- gets ready to return from the injured list, Maybin's place on the 25-man roster is in jeopardy. Just four days after optioning outfielder Clint Frazier (who had been hitting .283 with 11 homers and an .843 OPS), the Bronx Bombers will have an additional spot to clear in the next day or so.

Sidelined since April 20 after he strained his left oblique on a swing, Judge will be coming back after a rehab assignment with Triple-A Scranton/Wilkes-Barre. The rehab stint consisted of six games in which he homered once. The expectation is that Judge will be back on the active roster by Friday, the second game of this weekend's series against the American League West-leading Houston Astros.

Acquired by New York in a late-April trade, Maybin figures to be the odd man out unless the Yankees instead decide to send down a relief pitcher and preserve Maybin's fully earned spot on the roster.

"He's been so awesome to have, and to have in that room, and what he means to those guys already, and just how well he's performed for us," Boone said when asked about the way Maybin has ignored the noise about his future in the Bronx. "I love the player."

Added starting pitcher J.A. Happ: "He's been big for us."

Whatever the Yankees end up doing in the coming days, Maybin isn't playing as if his spot in the big leagues is on the line. He has been playing, in fact, as if New York will be his long-term home.

"CC [Sabathia] said it: 'These pinstripes ain't for everybody.' The pinstripes can be heavy," Maybin said to ESPN. "But for me, I feel like it worked out perfect, because with the expectation, and everything that comes along with wearing this uniform, a guy like myself who's been through adversity, who's been through some ups and downs, I think I'm made for the expectation.

The 32-year-old Maybin, who began the regular season in the farm system of theCleveland Indians, has found himself at the heart of several key moments throughout his time with the Yankees. Maybin has been particularly impactful the past five days.

Not only has he twice kept alive the Yankees' 22-game home run streak, he has hit a series of mammoth blasts reminiscent of that Chicago batting-practice session.

Tuesday night, with the Yankees looking for some insurance in the seventh inning against the division-rival Tampa Bay Rays, Maybin unloaded on Oliver Drake's 2-2, letter-high, 93 mph fastball. The ball finally came to rest just inside the left-field foul pole and halfway up Yankee Stadium's second deck of outfield seats, an estimated 429 feet away.

It was the longest ball Maybin has hit in a regular-season game since last July, when he had another 429-foot shot while with the Miami Marlins. The year before that, he hit a 430-foot homer off of Kansas City's Jakob Junis while playing for the Los Angeles Angels. That went down as his longest homer in the Statcast era (beginning in 2015).

"He's understanding now, he's doing a good job of getting the ball in the air with authority," Boone said. "He's believing that if, 'OK, I control the zone here, I don't have to hit the ball on the ground or anything, I can get my A swing off,' and that's what he's doing.

"He's hit some impressive ones, obviously."

Maybin said that from the time he arrived, the Yankees have preached one thing to him: Trust your swing.

It's taken some adjustment, but Maybin has fully embraced the advice of Yankees hitting coach Marcus Thames and assistant hitting coach P.J. Pilittere.

Maybin's five homers through 40 games are already half of his career high, once set in a year when he played 141 games. He's also batting .307 with six doubles.

"The biggest word is 'trust,'" Maybin said. "And being OK with taking a swing and swinging and missing.

"A big part of my thing is, I hate striking out. It's been hammered in me to not strike out. That's still in the back of my mind sometimes. Now it's just like, 'Hey, I've got three strikes.' Early in the count I'm looking for something I can really drive and do some damage on. ... I'm trying to hit a double, especially where I'm hitting in the lineup. Because when I'm on base, good things happen."

Although Maybin's 25% strikeout rate is among the highest of his career, he also has the highest on-base percentage of his career at .383. He's regularly on base when the Yankees' RISP king, DJ LeMahieu, comes to bat, typically one spot later. As a result, Maybin has scored 25 runs.

LeMahieu, nicknamed by teammates "The Machine," is among baseball's best hitters with runners on, batting .462 with 37 RBIs with men in scoring position.

"Yeah, drive something to get on second base with Le Machine. You know what I'm saying?" Maybin said. "Good things happen, man."

Maybin says some of the trust he has in his swing stems from the trust he has long placed in Thames, a former teammate. When a 20-year-old Maybin made his debut in 2007 with the Detroit Tigers, the former first-round pick was playing alongside Thames, who is 10 years his senior.

"He helped groom me, he helped mold me, he helped show me how to be a professional, so now having him on the other end, he's the same dude," Maybin said. "It almost feels like he should still be playing, the way he acts. He understands, and he keeps it real. There's no sugarcoating it. He's going to tell you like it is. He's going to tell you what he thinks, and it's for your benefit.

"It's like that parent, they're getting on you, but they're telling you for a reason. They think it can help you."

Perhaps the helpful advice Thames has offered Maybin regarding his "A" swing will be enough to keep the outfielder in the Bronx, a place he feels he belongs.

"This culture here is what I want to be around, where the only thing that matters is winning," Maybin said. "There comes a point where you just want to be part of a winning group.