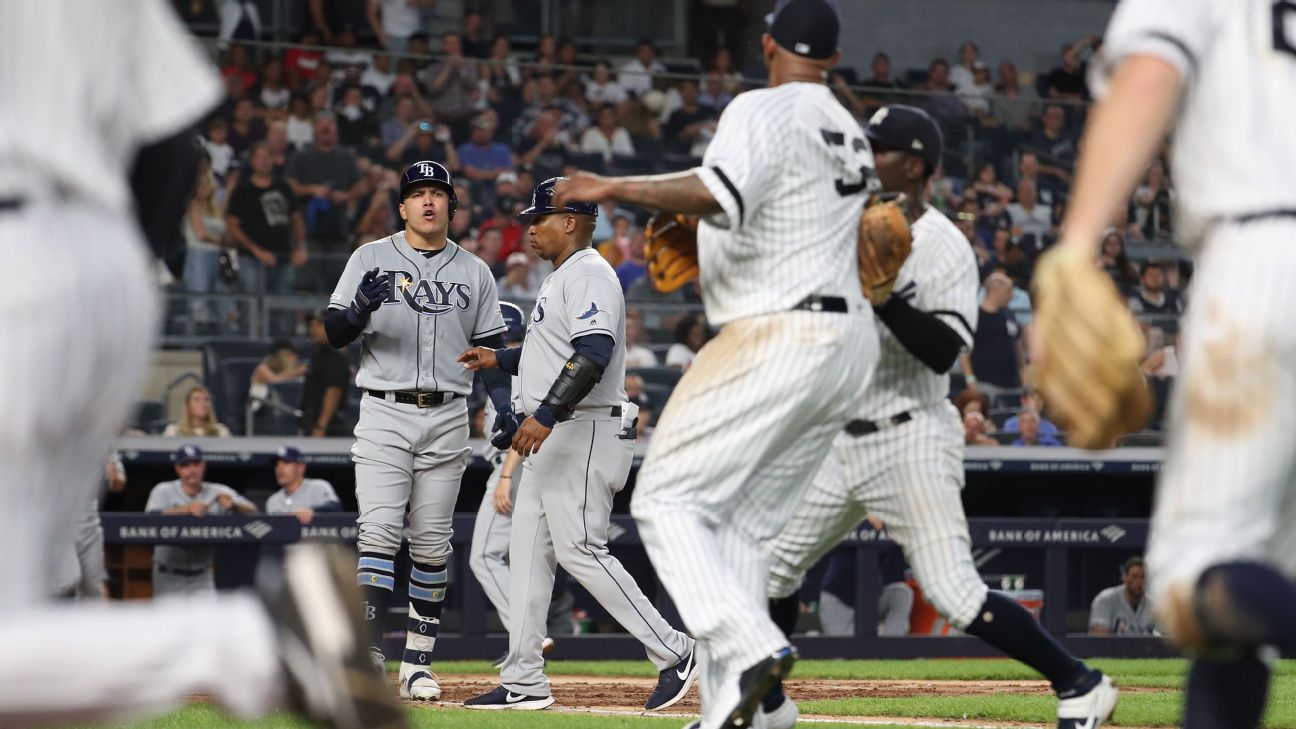 Sabathia, the veteran southpaw who has drawn the Rays' ire often in recent seasons, chalked the sixth-inning chatter up to a simple "misunderstanding."

"I wasn't talking to him," Sabathia said. "He looked up at me and said something, and it was on. I was just kind of yelling out and pumping myself up. He might have took offense to it, but it is what it is.

The war of words began when Sabathia closed out the top of the sixth by striking out Garcia looking. The called third strike appeared to be just outside the strike zone. As Sabathia walked off the mound, he glared toward Garcia, causing the surprised Rays batter to look up and raise his arms. Sabathia kept jawing from a distance and pointed at Garcia, who began yelling back.

As he was jogging toward the dugout, Yankees shortstop Didi Gregorius noticed his pitcher yapping and ran in to hold Sabathia back as both benches and bullpens cleared. Gregorius eventually led the fired-up Sabathia back to the dugout, and both teams dispersed shortly after.

"I saw him yelling, and I was like, 'I don't want him thrown out of the game,'" Gregorius said.

The 38-year-old pitcher was in such a fog of anger at the time that he didn't know who was holding him back. It wasn't until after the game, when the Yankees were bestowing their bedazzled, WWE-inspired, "player of the game" belt to Gregorius that the 300-pound Sabathia learned it was the 205-pound infielder who kept him in check.

"I didn't know he was that strong," Sabathia said.

Sabathia even caught Gregorius up near the neck with an accidental shot as his arms swung wildly. Gregorius laughed that off, saying he was fine.

Just as the teams reconvened for the start of the next half-inning, umpires issued official warnings to the dugouts that no more drama would be tolerated.

"We're always pretty lit," Boone said. "We're playing in this place. We know who we're up against. Don't think we needed any extra motivation. I mean, we'll take it, but I don't think that played into anything."

His players thought the activity might have inspired something within them. They went from trailing 3-1 entering their sixth-inning at-bats to being down one run thanks to DJ LeMahieu's solo homer in the bottom of the inning.

In the eighth, they scored six more when Aaron Judge hit a go-ahead, two-run homer, and Gregorius broke the game open with a grand slam that snapped a 1-for-23 cold spell he brought into the inning.

"Yeah, we fed off that. It kind of fired us up a little bit," Judge said of the midgame verbal barbs the teams exchanged. "CC's our leader. We've always got his back no matter what. I didn't really know what was going on running in, but if something happens, you've got to get to C."

Last season, during his final regular-season start, Sabathia was ejected for plunking the Rays' Jesus Sucre. The plunking came as Sabathia defended a teammate whose head had been thrown at earlier in the game. Had it not been for the ejection, Sabathia likely would have hit an innings milestone that would have triggered a $500,000 bonus.

The Yankees later gave Sabathia the bonus anyway, though he didn't officially reach it due to the ejection, which led to a five-game suspension at the start of this season.

Sabathia also had a few salty run-ins with Tampa Bay earlier this season, including when he threw at Austin Meadows three times and shouted insults during a game in May.

"Two good teams battling for the division. Things are going to be intense," Sabathia said. "Whatever. It is no love lost."

The lefty has been excellent against Tampa Bay, entering Tuesday with a 2.36 ERA in seven starts against the Rays the past two seasons. He left after six innings Tuesday with New York trailing 3-2 before the Yankees came back and won. 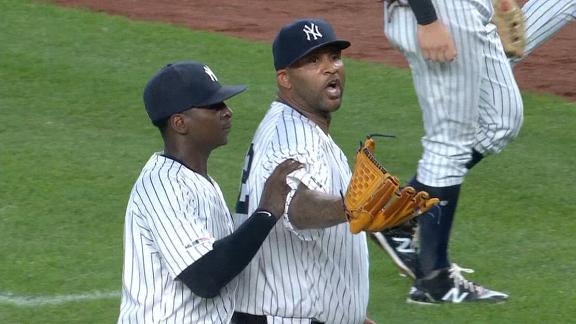