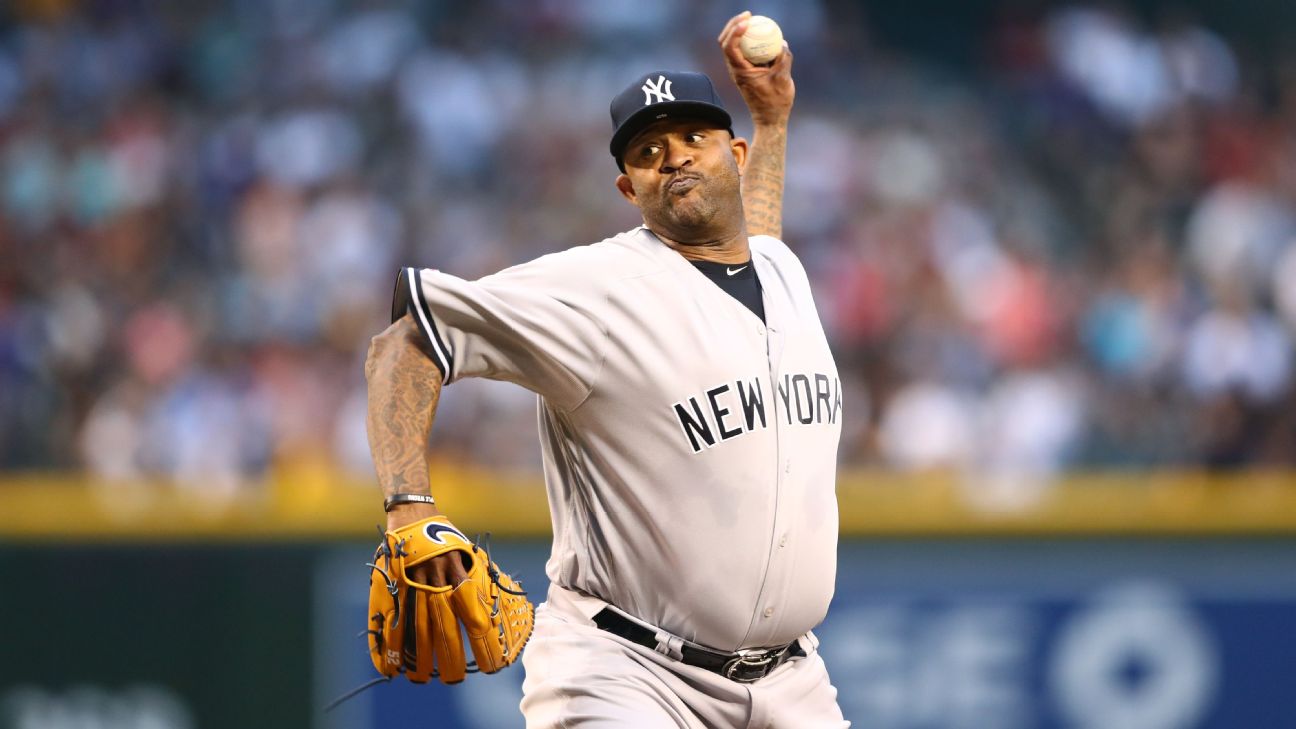 NEW YORK -- New York Yankees pitcher CC Sabathia is getting set to close his career as a reliever.

New York manager Aaron Boone said before Friday night's game against Toronto that Sabathia will work out of the bullpen next week as the American League East champions prepare for the playoffs.

The 39-year-old lefty has pitched in relief just once in his 19-season career, going 1 innings in a deciding Game 5 loss to Detroit in the 2011 AL Division Series.

Sabathia's other 583 appearances have all come as a starter. He is 5-8 in 22 starts with a 4.99 ERA this season and has dealt with knee trouble.

Sabathia has said this will be his final season playing in the majors.

The Yankees are still figuring out their rotation for the postseason, which begins Oct. 4 with the best-of-five division series. Masahiro Tanaka, James Paxton, J.A. Happ and Luis Severino are among the candidates to start.

Severino came back from a lat injury and made his season debut with four shutout innings in a start Tuesday. Domingo Germán, the team's top winner at 18-4, was put on administrative leave Thursday under Major League Baseball's domestic violence policy and his status for the postseason is uncertain.

Boone said he anticipates using Sabathia in a controlled setting next week at Tampa Bay. If that goes well, Boone said he would try it "a little more on the fly" next weekend at Texas. Boone envisions a "significant role" for Sabathia in the postseason.

"That's why we want to do this a couple of times. He's certainly on board with it and wants to do it," Boone said.

"I feel like for obviously as much as he has to deal with the knee, I feel like he's in at least a pretty good place right now to be able to do it," Boone said.
Report a correction or typo
Related topics:
sportsespnmlbnew york yankeescc sabathia
Copyright © 2021 ESPN Internet Ventures. All rights reserved.
TOP STORIES
NYC issues 'strong recommendation,' stops short of mask mandate
Father, 2 daughters and niece killed in NJ crash
Kathy Griffin announces she has lung cancer
Father of 5 who was waiting out COVID vaccine dies from the virus
COVID Updates: Employers ratchet up pressure on unvaccinated
Friends, family, fans bid final farewell to Biz Markie on Long Island
Father of 3 heading home after 6-month battle with COVID
Show More
MTA, NY Port Authority workers must be vaccinated or test weekly
Health care workers in NJ must get vaccinated or test, Murphy says
NJ's 5 tornadoes last week the 2nd biggest outbreak in 71 years
Adams kicks off general election campaign with de Blasio endorsement
WATCH: Gunmen ride off on mopeds after 10 shot in Queens
More TOP STORIES News